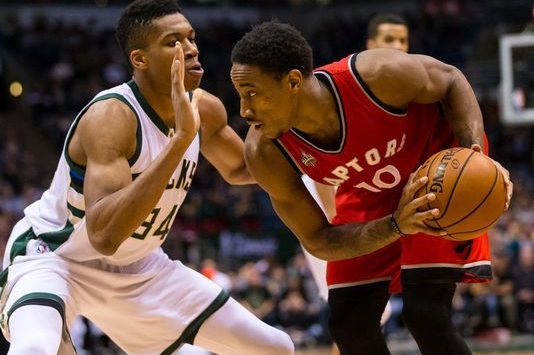 Raptors to Square of with Milwaukee in Round One

It was a season filled with highs and lows for the Toronto Raptors, but as the 82-game regular season came to an end on Tuesday night, the Raptors came out looking quite possibly as good as they ever have.

With the pressures of following up the best season in team history with the metaphorical ‘next step’, the Toronto Raptor defence heavily faltered throughout the first half of the season. Bismack Biyombo’s absence was easily noticeable, Jared Sullinger was unhealthy and ineffective, and Patrick Patterson was working through knee injuries. There was no team more excited for the All-Star break to commence than the Toronto Raptors who have fallen out of the second seed and had the fifth-seeded Atlanta Hawks breathing down their backs. A wrist injury to Kyle Lowry most definitely did not help the Raptors cause.

Yes, Lowry was lost indefinitely, but Masai Ujiri and his front office staff were able to bring in two names who instantly turned the entire team 180-degrees. Serge Ibaka and P.J. Tucker were acquired at the trade deadline and right from the get-go brought a sense of toughness, defensive presence, and the edge the Raptors were so sorely lacking since their 2016 NBA Playoff run.

Since then, the Raptors were the hottest team in the entire Eastern Conference, capping off an 18-7 run following the All-Star break with a win of the Cleveland Cavaliers B-Team. Now with Kyle Lowry healthy and back in the fold, and the Raptors sporting one of the top defences and offences in basketball, Toronto’s team is ready for the NBA Playoffs.

The journey to the top starts with the Milwaukee Bucks.

While the Raptors are deep at every position, the Bucks have been scuffling even with Giannis Antetokounmpo carrying a huge load all season long. Jabari Parker is out for the year, but the return of Khris Middleton from a knee injury has given the Bucks some much needed shooting range, but otherwise the Bucks struggle shooting the three, which will bode well for a Raptors team that struggles most when defending three.

The Raptors are now a veteran playoff team, while the Bucks are on relatively new ground. While the Raptors aim to build on last year’s success, the Bucks are still trying to find their niche, grow, and build for what should be a very bright future centred around some great young talent.

Head Coach Jason Kidd is very familiar with the Raptors, but unfortunately for the Bucks, this series will be centred around ‘The Greek Freak’ trying to will his team past a much deeper and talented Toronto Raptors team. The Raptors have some fiesty and tough rebounders who can keep him grounded for the most part and ultimately this is a series the Raptors should take fairly easily.