Playoffs From a Glance

The 2017 NBA Playoffs are in full tilt and while each team has only played two games, some things can already be deduced from what has been seen.

There are new storylines wherever you are too look, whether it is a one vs. eight seed or a four vs. five seed – the start of the playoffs has been tremendously exciting. An upset alert is brewing in the Eastern Conference, while the Cleveland Cavaliers and the Golden State Warriors have begun their first test of the playoffs as they attempt to reach the Finals for a third straight clash for the championship!

How have the playoffs gone so far? Let’s take a quick dive into the action!

Boston Celtics vs. Chicago Bulls: Most Unintimidating One Seed?

As if the tragedy that has come over Isaiah Thomas’ mortifying loss wasn’t bad enough, the Boston Celtics are now down 0-2 with the series shifting onto enemy territory. The Chicago Bulls have been outmuscling the Celtics on the glass and simply outplaying them on the floor. It is never fun when the best player of the series is on the other side, but if the Celtics hope to shed the image of being the so-called worst one seed ever, they have to turn things up in a hurry.

Cleveland Cavaliers vs. Indiana Pacers: Continuing to Hold On

The problem has never been getting out to a lead for the Cleveland Cavaliers. Offensively things are running smoothly for the Cavs as both LeBron James and Kyrie Irving are balling out, as advertised. The three-point attack hasn’t been much of an issue for the Cavaliers either as was the case during the regular season. The problem for Cleveland comes in the fourth quarter where they have been outscored 57-38 through the first two games showing the inability to close out the seven-seeded Indiana Pacers early.

James has never lost a series when his team has been up 2-0, but the Cavs must put an emphasis on ending games on a strong note and keeping their foot on the pedal.

The Raptors were finally able to get over the hump after a Game 1 defeat. As the series moves to Milwaukee for the next two games, mental and physical toughness will be a must. Is Kyle Lowry back after a horrible first game? Only one way to find out, but one thing is for sure – the Raptors will need every bit of their superstar point guard down the stretch.

After a Game 1 defeat, Paul Millsap of the Atlanta Hawks accused the Washington Wizards of “playing MMA” as opposed to basketball. Unfortunately for the Millsap and his Hawks, the Wizards have delivered the metaphorical first punch and the Hawks have to this point been taking it on the chin. The Hawks now have two games on their home court and it is time for the Hawks to answer back physically.

It’s playoff time. This is when teams have to leave it all on the court.

Golden States Warriors vs. Portland Trailblazers: Are They Too Good?

Kevin Durant or not, the Golden State Warriors have had almost zero trouble blowing past the Portland Trailblazers in Games 1 and 2. Defensively the Warriors are suffocating the Blazers specifically with Draymond Green, Klay Thompson, and Shaquille O’Neal’s favourite player, JaVale McGee. Offensively, the mismatch is evident and should continue as the series goes on.

Can the Blazers even take one from the Blazers at home? It starting to seem increasingly unlikely. The Warriors may just be far too good. 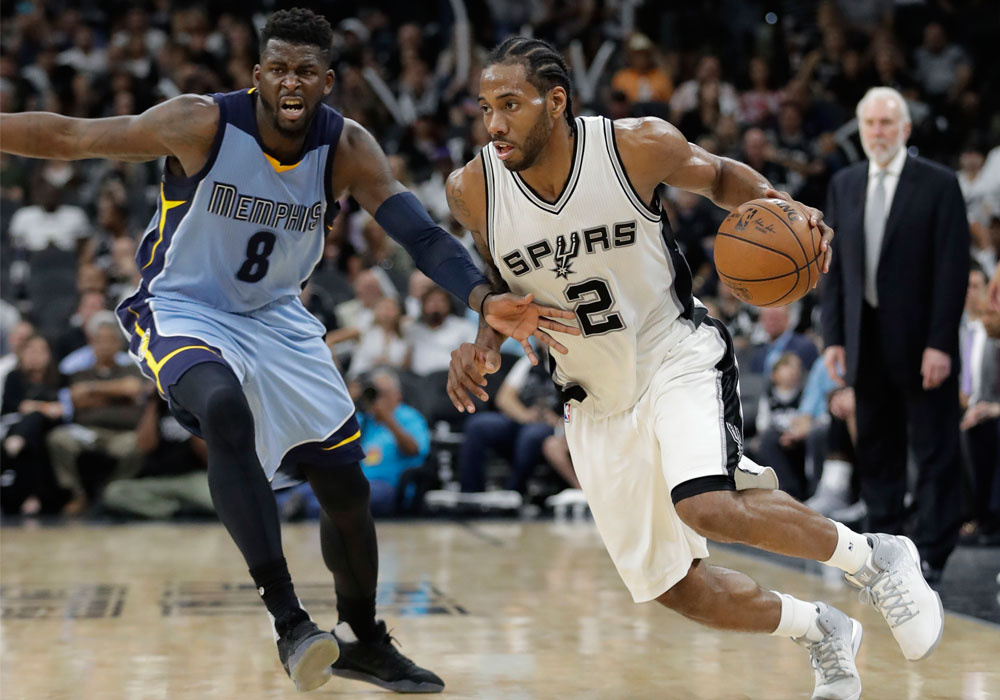 There are three guarantees in life – death, taxes, and the Spurs winning basketball games.

That trend has kept up into the early going of the NBA playoffs. Already undermanned, the Grizzlies have been struggling to get any calls from the referees in the early going of the series. Meanwhile, behind Kawhi Leonard, the Spurs are slowly putting the Grizzlies away. Over the past half-decade the Grizz haven’t really changed much and it is really starting to seem like the Memphis have hit their ceiling and are since starting to decline.

Houston Rockets vs. Oklahoma City Thunder: No I in Team

Technically there is no ‘we’ in team either. Russell Westbrook is proving just that all by himself. His team down 0-2 already, Westbrook scored a 51-point triple-double in Game 2, but still shot the ball a horrific 4-for-18 in the final quarter. Westbrook may never change, but eventually, he will need to trust his guys if the Thunder are to get wins in the playoffs against the NBA’s elite.

On the Rockets side, James Harden has clearly adopted the point guard role in Mike D’Antoni’s system and has run with it. With the Rockets offence running at a historic pace, it will be up to Houston to make the key defensive stops as the playoffs go on.

The Los Angeles Clippers may be in the final year of keeping their ‘Big 3’ together. With Chris Paul and Blake Griffin heading into free agency, this may very well be their last ride. The Clippers haven’t been able to break through with their core, and this is their chance. The Utah Jazz have lost their defensive anchor. Rudy Gobert, seconds into Game 1. As the deadlocked series moves to Utah, the Clippers must take advantage of this break and finish off the Jazz as quickly as they can.