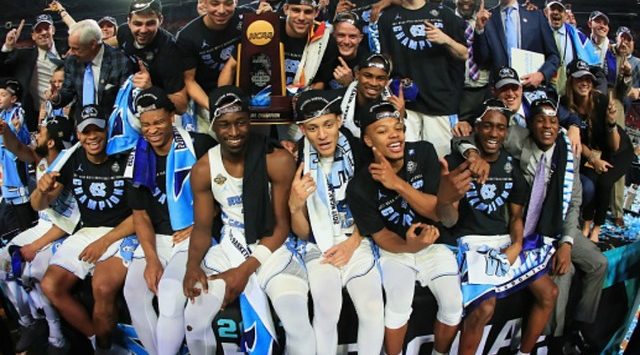 UNC Takes Down Gonzaga in Thriller

A year ago, the North Carolina Tar Heels had their heads down, filled with emotion after a Kris Jenkins buzzer beater cost them a shot at the National title. Heartbroken and teary-eyed, the Tar Heels watched Villanova raised the National Championship trophy.

With Head Coach Roy Williams’ fist held high in celebration of his third National Championship, the Tar Heels now have a sixth banner to raise. Led by a hobbled Joel Berry’s 22-points and six-assists and Justin Jackson’s 16-point effort, UNC took down the Gonzaga Bulldogs by a score of 71-65, in a game unfortunately dictated by the referees.

Nigel Williams-Goss tried to get his team the win late, pouring eight straight points for the Zags, but at the end, it was the Tar Heels who reigned supreme. Taking away nothing of course from Gonzaga, who fought all tournament long and deserve all the credit in the world for their effort.

“We did a lot of things people didn’t expect us to do this year,” Gonzaga Head Coach Mark Few said on his team and his star player, Williams-Goss. “I’ve just been with him for the last 10 minutes trying to console him. He’s just such a ferocious competitor and such a winner that he doesn’t know how to process losing because it doesn’t happen very often.”

On the other end of the court, the tears in the eyes of the Tar Heel players were much different than those of the year prior.

“Pretty much everybody on the floor was tearing up,” Theo Pinson of UNC said.

It was a tournament to remember, with redemption becoming one of it’s biggest headlines. While Gonzaga put up a hell of a fight, the Tar Heels deserved their sixth National Championship in school history!