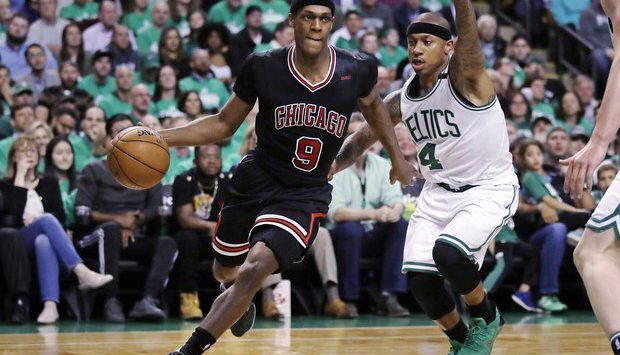 The Playoffs can be fun from time to time.

The eight-seeded Chicago Bulls for instance have been enjoying a very comfortable start to their playoff run, sitting up 2-0 on the Boston Celtics as they return back home for Games 3 and 4.

Well, apparently someone in the basketball god’s house up in the sky felt like the Bulls were having things far too easy. On Friday morning, a bit of bad news have officially came in from the Bulls’ camp as reports suggest that the team will be without starting point guard Rajon Rondo for the indefinite future. Rondo suffered a fractured right thumb in Game 2’s blowout Bulls win over and will be re-evaluated in the next seven to 10 days.

The report also suggested that the injury is serious, but the point guard will not need to undergo any surgery.

“We’re going to miss him,” Bulls All-Star Jimmy Butler said after Friday’s shootaround. “The pace that he sets for the team, the leadership that he brings, and the way that he plays. We’ve still got to go out there. We’re expected to win. We know what we’re capable of. I guess we’re doing this for him now.”

In Rondo’s absence, sophomore Jerian Grant will take the reigns of the starting gig with former Rookie of the Year, Michael Carter-Williams filling in as his back-up.

“Rondo’s obviously been unbelievable in the two wins that we had in Boston,” Head Coach Fred Hoiberg said today. “So to get the news that we got last night was obviously very difficult. At the same time, the guys are going to get an opportunity to play more. It’s what you work for. It’s why you put so much extra time in the gym is for this opportunity … everybody’s going to have to be ready to pick up for what Rondo gives us.

“We can’t change the way we’re approaching things right now because one of our star players is out. We need to pick up for what he gives us, and I’m confident our guys will do that.”

A tough blow for the Bulls no doubt, but the NBA Playoffs is the ultimate war of attrition!

Rondo poured in 11-points, 9-boards, and 14-assists in a 111-97 Game 2 victory over the Celtics and has been averaging a near triple-double through the first two games of the Bulls run.

At the very least, Rondo will not have to worry about any boos from Celtics fans if the serious is to return back to Boston for Game 5.