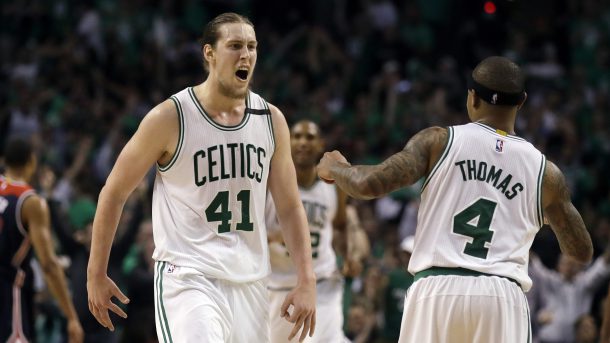 The Boston Celtics are headed back to the Eastern Conference Finals for the first time since 2012, while the Washington Wizards head home after an impressive return-to-form season.

A playoffs that has been captivated by Isaiah Thomas’ resiliency, the miniature point guard came alive once against in Game 7, putting up 29-points and dishing out 12-assists, en route to leading his Celtics to a 115-105 series win.

Despite another brilliant performance logged in by Mr. Fourth Quarter, it was the help from a certain Canadian that pushed the Celtics forward to the next round of the playoffs. Kelly Olynyk, often known for his dirty tactics, is still a very skilled player and many forget that due to all of the outside noise. On Monday night, the former Gonzaga Bulldog matched his season high with 26-points on 10-for-14 shooting from the field, good for a 71.4 shooting percentage.

“Everyone gave their best tonight and it turned out well,” Olynyk said. “It was a team effort, hard work. It was a tough seven-game series. Both teams played hard, we outlasted them there. They are a great team. They made big shots all series.”

While the performances of Thomas and Olynyk took centre stage, the play of the entire team contributed to the victory. Down the stretch, John Wall shot 0-for-11 due to the suffocating Boston defence. Between the likes of Avery Bradley and Marcus Smart, Wall was neutralized and despite the 38-points from Bradley Beal and the 20-and-10 performance from Otto Porter, the Wizards needed more to overcome the Celtics and they simply did not get it.

The Celtics forced 15 Wizards turnovers which led to 17-points, the Celtics moved the ball better and ended the game +9 in assists and despite losing the rebound battle, the Celtics shot 53% from the field and 42% from beyond the arc.

“I knew it would be a big time game tonight. I knew it wouldn’t be easy at all,” Thomas said following the win. “And we came out on top.”

For the Wizards, it is back to the drawing board. With a star-studded backcourt in tact, the Wizard have finally watched Porter take a big step forward. It will now be up to the organization to keep surrounding Beal and Wall with depth.

“It’s tough. We came out here Game 7 and gave everything we had. Just came up short,” Wall said. “Our goal was to get to Eastern Conference finals and we came up one game short. So it’s a not a satisfied season to me.”

As for the Celtics, they now advance and will face the Cleveland Cavaliers in the next round, a team undefeated through eight games of their playoff run.

It is now down to four!