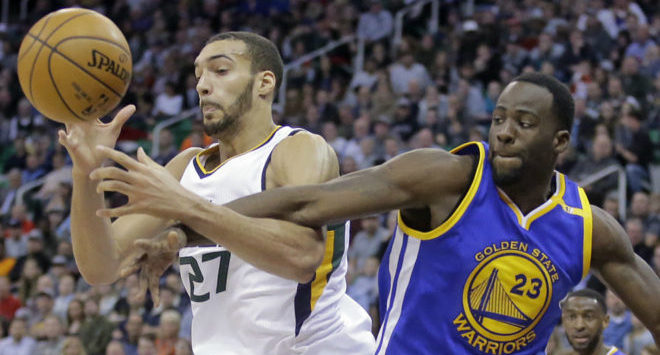 What the Cleveland Cavaliers can do, the Golden State Warriors can do better.

After their counterparts advanced to the Eastern Conference Finals, the Warriors did the same after defeating the Utah Jazz in four games, eliminating them from the playoffs. Steph Curry led the way with 30-points for the Warriors en route to a blow out 121-95 victory. The Warriors will now await the winner of the Houston Rockets-San Antonio series.

Once again, the Warriors have yet to have met a worthy challenger in this postseason. The Warriors shot 51% from the field and 42% from deep for the game, out-rebounding, out-assisting, and out-hustling a Jazz team that simply folded right out of the gate. The Warriors were up 39-17 after quarter number one, and while the Jazz caught up a little bit in the second quarter, the Warriors pulled away in the second half to seal the series sweep.

“We have a lot of talent,” Curry said following the win. “We never know who is going to have a hot night. We try to move the ball, use each other to create open shots and when we do that, the ball is hopping and a lot of good things happen.”

While the back court of the Warriors combined for 51-points, it was another great from Draymond Green yet again. The defensive anchor of the Warriors finished with a triple-double, recording 17-points, 10-boards, and 11-dimes to help Golden State roll past the second round.

“The most important thing was we imposed our will on the game and we had the game at our pace,” Green said.

On the Jazz side, this is the end of what was a very successful season. Exceeding expectations, Utah now enters a very interesting offseason with their best player and All-Star Gordon Hayward set to enter free agency.

Jazz fans chant 'Gordon Hayward' as the game comes to an end. pic.twitter.com/7MRV51nFHU

From the sound of it, it seems like the fans want some more “Gordon Hayward” in Salt Lake City! Hayward, once again, led the Jazz with 25-points in the loss.

“It’s been a unique arc for us,” Jazz coach Quin Snyder said. “The adversity that kind of continued to rear its head and the way these guys dealt with it. It was apropos tonight. What happened, happened. We got blitzed.”

It is onto the next one for the Warriors!