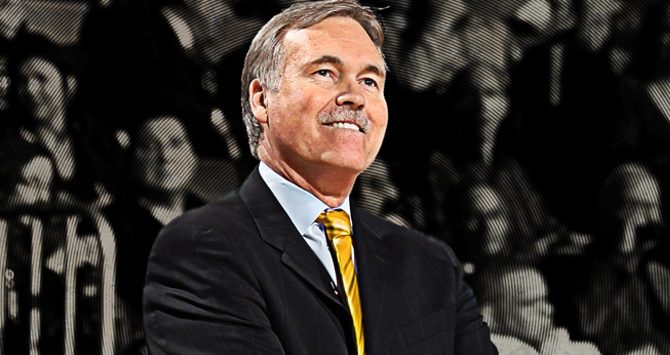 Fired after the first year of his head coaching career, Mike D’Antoni found success in his next destination – Phoenix, Arizona.

For five long years, D’Antoni transformed the Steve Nash-led Phoenix Suns into an offensive juggernaut, leading them to a 253-136 record over that span. Despite the continued greatness of his offensive schemes, the Suns were never able to break through. The dream of reaching the NBA Finals was never to be reached. After being eliminated in five games in the first round of the 2008 Playoffs, D’Antoni moved on from the Suns, heading to grandest arena in the world in ‘The Big Apple’.

It was a revolutionary offensive mind coming together with one of the sporting world’s biggest markets. The pressure attached with not only playing, but coaching in New York cannot ever be overstated. In a city starving for an NBA championship, with Amar’e Stoudemire and Carmelo Anthony on board, winning was the only option for D’Antoni.

Yet, winning was the furthest from what D’Antoni’s tenure in New York can be characterized by.

Four years that saw one playoff appearance, in which the 42-40 Knicks got swept in the first round, were filled with controversy, backlash, and media drama. Tensions began to grow between D’Antoni and Anthony, and it all led to D’Antoni resigning in the middle of his fourth year with the club.

D’Antoni moved onto the Lakers shortly after – a team build to win that very year. After the Lakers brought in Dwight Howard and Steve Nash to play alongside Kobe Bryant and Pau Gasol, team executive Jim Buss opted to turn to D’Antoni over Lakers coaching legend Phil Jackson. D’Antoni now had the keys to what looked like a superteam on paper, but an absolute mess in reality. Los Angeles was yet another big market and as D’Antoni quickly butted heads with both Howard and Bryant, another opportunity for Coach D’Antoni to legitimize his career was squandered.

After two seasons with the Lakers, D’Antoni was fired and the criticism continued to grow.

A coach who cannot coach defense. ‘Mike Antoni’ without the ‘D’, well you could probably guess as to why. Too much finesse, too much flash. Offensive schemes built around shooting three-pointers and setting up an offense in seven seconds or less.

Post game? Forget about it. All big man who cannot shoot threes or spread the floor are useless.

Ludicrous right? An offense built around spreading the floor, fast breaks, pass-happy play, and shooting three-pointers. An offense without the staple big man down in the paint working for his buckets.

How can something this silly ever work? You’re telling me this is a dude who won an NBA Coach of the Year award back in 2005 for this foolishness? Damn. This style will never work in the NBA. Never.

This very same style originated by D’Antoni is exactly what the Golden State Warriors have run since Steve Kerr took over the team. How did the San Antonio Spurs dismantle the LeBron James-led Miami Heat a few years back in the finals. Was it that pass-happy, three-point based attack oddly reminiscent of that buffoon D’Antoni’s offense? The great Coach Pop taking a page out of D’Antoni’s book?

What have the Cavaliers been doing lately with LeBron James in the middle of the offense playing the role of point-forward? Please don’t tell me that yet another championship winning team is using D’Antoni’s offensive blueprint.

Let’s stop for a second and think. What is the NBA even becoming? A league where teams who can quickly set up their offense, spread the floor, drive-and-kick, move the ball and find the open three-pointer.

Back in the day when D’Antoni was just bringing this system from Italy into the NBA his rosters have always had shooters. A coach is only as good as his personnel and his schemes.

What every D’Antoni team has always had is one true superstar. With the Suns it was Nash, the ball-dominating guard. Stoudemire was a star, but a big reason for his success for Nash and D’Antoni’s pick-n-roll schemes.

Even prior to his injuries, was Stoudemire the same player in New York with grandpa Jason Kidd and Carmelo Anthony, a shooting guard with poor court vision?

In New York, Anthony was the one superstar, in Los Angeles, it was Kobe Bryant. Nash was old and could not find his fountain of youth, Pau Gasol was past his prime, and Dwight Howard hard labrum issues and couldn’t ever get on the same page with D’Antoni – a common theme in Howard’s decade-plus career.

A case could very well be made that in D’Antoni’s coaching career, he only had two great wing defenders in his prime – Shawn Marion and Patrick Beverley. 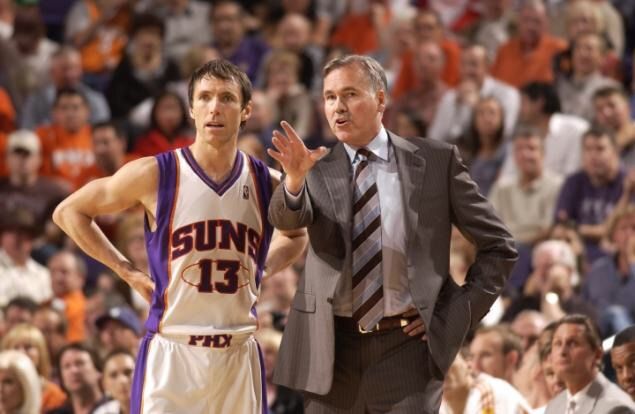 I can wait for you to run through D’Antoni’s rosters on Basketball Reference or NBA.com, but that is a fact. When a coach has a roster of players who cannot even stop a school bus at a stop sign, well there is a problem. I am not saying D’Antoni is a good defensive coach, he isn’t, but not many head coaches in the history of the league knew how to run a perfect offense and defense. That is why there are assistants, that is why teams have tough-minded players who come in with good defender on their scouting report. D’Antoni never really had that.

Crazy how when you put a few defensive-minded guys on a team with an offensive formula that works, an NBA Championship ring may soon follow.

Now, after one season as coach of the Rockets, D’Antoni has taken advantage of James Harden’s great court vision, put the ball in his hands as the primary ball handler, and the Rockets took off. Getting a three-seed just one season after their disastrous 2015-2016 campaign. The Rockets went onto beat the Oklahoma City Thunder and then stayed in tough against a veteran Spurs team.

D’Antoni is now a favourite to win his second career NBA Head Coach of the Year award. This isn’t by luck. There has never been an offensive mind like D’Antoni’s.

There will still always be controversy surrounding his name. Hell, he may never make it into the Naismith Basketball Hall of Fame, But he most definitely should.

D’Antoni. The fool. The buffoon. The outcast. Antoni.

There may not be championship ring on his resume, but he has changed the game forever. The high-powered Suns and Rockets offence that broke NBA records was built by this man. The money Stoudemire made in free agency only to come back and bite the Knicks, a lot of credit must go to this man.

Remember when Melo went down with an injury and a young, unproven Harvard alum came out of no where and amazed the world. D’Antoni was the puppeteer from the bench and ‘Linsanity’ was born. ‘The Splash Brothers’, the electric Warriors style of offense, where did all of it come from?

Results always the most important aspects to sports, business, politics, everything really, and I get that. D’Antoni designed a style that never translated into championships, but almost 15-years after D’Antoni first introduced his style into the NBA, taking what the ‘Showcase Lakers’ did to a completely different level, the NBA is now in debt to D’Antoni.

Microsoft is neat, but everyone wants an Apple. Blackberry Smartphones were a cool concept, BBM? So cool, but who doesn’t want the next iPhone?

D’Antoni started something and for that he will always be remembered. He is a Hall of Famer who due to his resume may never make it where he truly belongs.

But no matter what, despite yet another early exit from the playoffs with his Houston Rockets, D’Antoni has created a legacy for himself, which will never be forgotten.