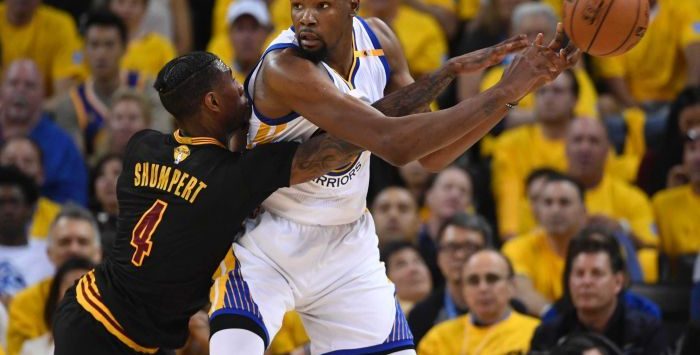 After Game 1, Richard Jefferson said the Cleveland Cavaliers didn’t need to make any adjustments leading into Sunday night. After yet another blow out, it may now be extremely necessary for the Cavs to find some way to slow down their scorching hot opponents.

I mean RJ doesn’t have to admit it, but it’s quite clear that something is definitely not working.

That something is simply not being able to hang with the high-powered Golden State Warriors offense who once again blew out the Cavs by a score of 132-113. They score, they move the ball well and more importantly, they move the rock quick. The Cavaliers cannot get into their defensive sets, nor can they slow the game down for a second.

The next issue is not able to deal with the second and third best players in the world.

First off, Kevin Durant is simply out of this world. He can shoot from anywhere, his long strides allow him to get to the basket against anybody with ease, his length allows him to score over anybody, and on defense, that very same length creates issue after issue. The Warriors superstar went off again, dropping 33-points, grabbing 13-boards, while dishing out six-dimes, blocking a crazy five shots, and picking up three steals.

That’s called being all over the stat sheet.

Durant’s efforts were matched by those of Stephen Curry, who as well did a bit of everything en route to a 33-point, 10-rebound, 11-assist triple-double, while hitting all-14 of his free throws on the night.

“Our offense isn’t the problem right now,” Kyrie Irving said following the loss. “Just coming into halftime again down by three points, and they jump on us again. Create a deficit and cut it to four. We just have to sustain effort over the entire game. We understand how dangerous they are. When you’re down by three, it can turn into an 8-0 run in a matter of seconds. We have to be conscious of that and slow down their fast break more.”

As for Irving, the Warriors were able to keep him in check. With Klay Thompson playing sturdy defense on one end and Curry forcing the Cavaliers point guard to run around off screens all night on the other end, fatigue is starting to set in and Irving is becoming a non-factor.

“Defensively, now he has to do a lot more,” Cavs coach Ty Lue said. “Running around with Steph [Curry] and chasing Klay [Thompson] and chasing Steph and constantly having to be on alert, it takes a lot out of you offensively.

So far things have clearly not been looking good for the Cavs. They are receiving very limited support from their secondary players and let’s put it this way – when Curry grabs ten boards and Tristan Thompson only picks up four, it shows which team is working harder.

Aside from a brilliant night from Kevin Love, LeBron James was the only thing the Cavs had going for them. ‘King James’ went off for 29-points on 67% shooting, grabbed 11-boards and dishing out 14-assists, setting up the Cavaliers offense all night long.

Unfortunately, it will take the entire Cavaliers team to beat the Warriors. James alone will not be able to will the Cavs past Golden State. It is why the Warriors are built as they are, to force other players to help LeBron beat them.

The defense must improve otherwise, this series won’t last much longer.

Some more good news for the Warriors was marked by the return of Coach Steve Kerr to the baseline. The Warriors bench boss was out the past couple of rounds recovering from complications, which stemmed from two back surgeries.

“It felt great,” said Kerr. “Got a really nice reception from our fans and our players. It was just great to be on the sidelines again. That’s what makes it so much fun, to feel the energy of the Finals. And so it’s really nice to be back.”