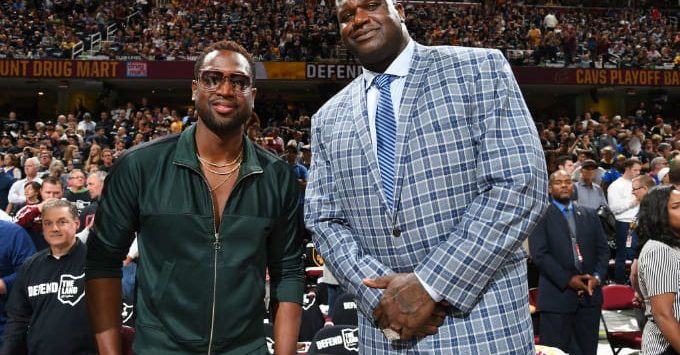 A lot of the time, the clothing choices we see from Russell Westbrook takes up all of the fashion headlines in today’s NBA.

Unfortunately, Westbrook’s sense of style forces us to lose site of how hard the rest of the league’s star work to put on some eye-popping gear for the world to be forced to see.

The star in question at this present moment is Dwyane Wade.

The Chicago Bulls superstar and former teammate of LeBron James made an appearance during Game 4 of the NBA Finals to cheer on one of his best buddies, ‘The King’ himself, and D-Wade made the most of his camera time, donning an outrageous, yet interesting look.

When you are a three-time NBA champion and one of the best to ever do it, why not, right?

7Rings and thee MouthPiece of a champion! #nbafinals2017 @stephenasmith @shaq

Let’s take some time to take a look at some more of Wade’s infamous fashion choices!

Wade clearly never shies away from the camera.

The NBA Playoffs and Finals has seen some of my most memorable and trendsetting looks. Now, I want to see your favorite "fashion forward" and "trend setting" #fbf looks. Hashtag #beststyle #dwyanewade and tell me what people thought of your look.? I'll post some of my favorite flashback friday looks from you guys. #nbastyle #yallrememberthisonehuh

Let’s see what will come from Dwyane Wade next!

The Wifey (@gabunion) and I are showcasing some real cool, curated items at our D&G His & Hers @Fancy pop-up during All-Star Weekend New Orleans from Fri-Sun at International House Hotel. Featuring @stancesocks @wayofwade @thetiebar @missionathlete @muzikconnect @lyfebrand and more. Doors open from 11am-7pm beginning Friday! Don't miss it! #DGFancy