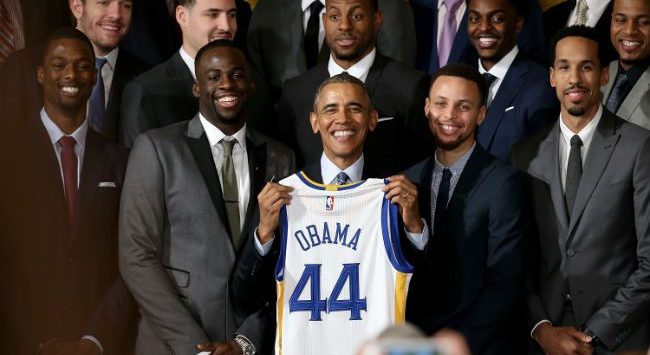 The Golden State Warriors are the new NBA champions and it has become somewhat of a tradition for the champions of American major sports to make a visit to the White House, presenting the president of the United States of America with a jersey.

The Warriors may be the first team to skip the trip completely.

With Head Coach Steve Kerr among many other Warriors personnel voicing criticism directed towards President Donald Trump it will be no surprise if Golden State chooses to celebrate their championship victory elsewhere.

While NBA Finals MVP Kevin Durant declined to comment on the matter, Stephen Curry immediately declined any notion of making the visit.

“It’s been a conversation that has surrounded the Patriots and the college football team (Clemson) that won whether they collectively do it as an entire group or certain people would sit or what not,” Curry said. “All I know is I would personally do the right thing for me. The team will have a conversation about what is going on moving forward. There is probably more to come on that, but just right now we just won.

“Somebody asked me about it a couple months ago, the hypothetical, ‘If a championship were to happen, what would I do?’ I answered, ‘I wouldn’t go. I still feel like that today. But obviously as a team we’re going to have a conversation. This is a moment we’re going to enjoy together. Nothing should distract from what we were able to accomplish together, the different kind of ceremonies and the tradition. We are a championship winning team. We don’t want that to taint what we’ve accomplished. We will handle that accordingly and responsibly and do the right thing for us individually and as a group.”

The Warriors collectively claim they have not made a decision on the matter, and stated it is something that is simply not atop their list of priorities.