Warriors Back on Top and James is to Blame 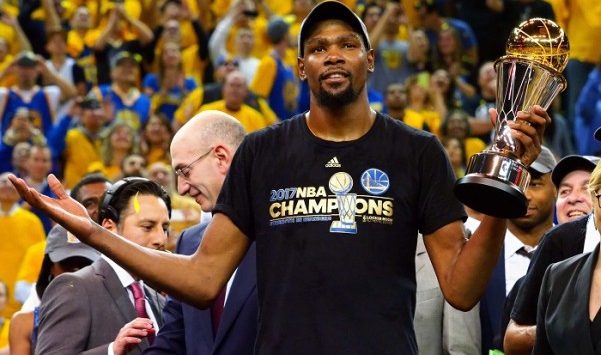 They hired him for this very moment – to get the job done.

In the NBA Finals and Game 5 specifically, Kevin Durant sealed the deal and was able to hoist his first NBA championship along with a well deserved Finals’ Most Valuable Player award.

“I couldn’t sleep for two days,” Durant said after eliminating the arch-rival Cavaliers in five games. “I was anxious, I was jittery. I just wanted to lay it all out there. I put in work, I just had to trust in it. We were really good tonight.”

The Warriors were really good en route to a 129-120 victory, but no one was as good as Kevin Durant – highly recognized as the second greatest basketball player in the world. Putting up 39-points on an incredible 14-for-20 shooting in the victory, answering every big Cavaliers basket with an even bigger shot, placing more and more doubt in the minds of the opposition as he kept picking up steam. Through five Finals games, Durant averaged 35.2-points per game – he was a man on a mission, and he was not ready to let the Cavaliers come back for a second straight NBA Finals.

Even in victory, a humble Durant was quick to acknowledge his Finals’ opposition.

“You have to tip your hat to Cleveland,” he said. “LeBron [James] and Kyrie [Irving], I’ve never seen nothing like them two before. But we prevailed, we’re champions and it’s amazing doing it on our home floor… He’s [LeBron] the only person that I was looking at since 2012. I knew it was going to be a battle I just tried to challenge him – you can’t stop the guy. I told him we’re tied up now and we’re going to try to do this thing again but I’m going to celebrate this one tonight.”

LeBron James was his usual self despite the defeat. The Cavaliers superstar became the first NBA player to ever average a triple-double in an NBA Finals and finished the contest with 41-points, 13-rebounds, and eight-assists, doing everything imaginable in his 46-minutes of play to help the Cavaliers live to see another day.

At the end of the day he could not get it done, but surely, ‘The King’ will be back on the stage that has gotten all too used to seeing him time and time again.

“I left everything on the floor every game, all five games,” James said in his postgame press conference. “I have no reason to put my head down. I played against some really, really good teams that were assembled perfectly, and they’re right up there.”

At 32-years old, for nearly the past decade, the road to an NBA championship has gone through James himself. A legacy of pro-longed consistency unmatched by any player to ever play the game, James sits alone even in defeat as the greatest to ever lace a pair of basketball kicks.

Vilified endlessly, James remained humble after suffering his fifth Finals loss. He fell to a team that was built to beat him – an philosophy which has become a trend in today’s NBA.

Last season, the James willed his team back from a 3-1 deficit to take down a 73-win team in the NBA Finals to bring Cleveland its first NBA championship. Desperate in taking James down, the Warriors brought in another former M.V.P. in Kevin Durant.

The Toronto Raptors are in “culture reset” mode after being swept by the Cavaliers, a couple other Eastern Conference teams are doing anything possible just to take down James, while the large majority is focused on tanking in an effort to build a future once James relinquishes his throne. Out in the West, the Warriors adding Durant is nothing but a tribute to the greatness that James exudes.

The Warriors are the new champions, but the NBA continues to revolve around its centrepiece – LeBron James.

The spoils of victory! ? #ThisIsWhyWePlay

Without James, there would be no culture resets, no firings of head coaches who were pegged as the scapegoats, no trusting the process long-term tanking. Without James, there wouldn’t be the greatest NBA team ever assembled. That greatest team to ever be assembled was the 2017 NBA Champion Golden State Warriors, and they were built for one purpose – to take down James.

With the Warriors claiming championship status, it is now time for James and the Cavaliers to go back to the drying board and find a way to take down the behemoths which LeBron helped build. James told his co-star Kyrie Irving immediately following elimination that the Cavaliers will be back, and it will definitely not be long till we see James and Irving leading the Cavs to the championship again.

As for the Warriors, they will now celebrate a second NBA championship in their past three seasons. A well-earned and hard-fought victory, they deserve their time to let loose before an interesting summer commences.

“Winning a championship is so hard,” Warriors Coach Steve Kerr said. “And when you do it, you just get nine months of all this work and you can finally let loose.”

For the championship competition & brotherhood… #ThisIsWhyWePlay

The summer for the Warriors will be a telling one. Andre Iguodala and Shaun Livingston may have played their last games as Warriors as they are set to hit free agency, but the Warriors are in good hands both salary cap wise and talent wise as youngsters Ian Clark and Patrick McCaw have proven to be suitable replacements moving forward.

The big decision will revolve around Kevin Durant and Steph Curry. Durant has a player’s option for the 2017-18 season, one that he can surely opt into. Curry on the other hand is a free agent, and it will be up to the Warriors to do everything in their power to lock up their two superstars for the foreseeable future.

One thing which should have Warriors fans feeling optimistic, it is the comradery of their basketball team. Durant and Steph Curry were clearly playing at superstar levels in the NBA Finals, but in the system in which they play in, they understand that they are just pieces of the puzzle that helped bring another championship to the Bay Area.

“We learned from everything we’ve been through,” Steph Curry said, glistening after winning his second NBA championship. “Our perspective, being blessed to play on this stage three years in a row, it’s for these fans, for our organization, for these families. To be back here, bring ol’ Larry back home, I’m just excited to do something special. I’m ready to do it again.”

‪Larry is back in the Bay! ? #DubNation ‬

Something tells me, that this isn’t the last we see of Curry and Durant for that matter in Oakland.

It was a phenomenal NBA season, mixed with ups and downs, but as the smoke clears, the Golden State Warriors reign supreme once again.