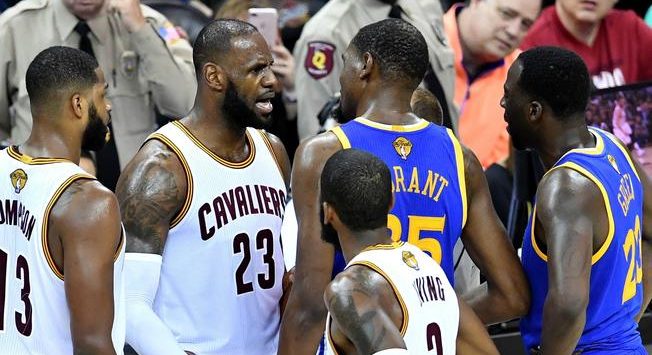 The Golden State Warriors now have a 3-1 series lead in the NBA Finals.

Everything clicked for the Cleveland Cavaliers on Friday night as they fought off elimination and are headed back to the Bay Area for another must-win matchup.

After a heartbreaking loss on their home floor in Game 3, J.R. Smith or his hacker tweeted out “Cavs in 7”, a tweet Smith very quickly deleted, but the message was something that circulated throughout Quicken Loans arena amongst Cavs fans all night on Friday.

And their team responded in a big way.

The Cavs came out guns blazing racking up an NBA Finals record 49-points in the first quarter, an NBA Finals record 86-points in the half, sunk a Finals record 13-three pointers in the half, and 24-for the game en route to a 137-116 victory. The Cavaliers also got to the line 22-times in the opening quarter alone. As fishy as the whistle was early on, the Cavaliers did exactly what they were supposed to do since the start of the series – they finally played physical basketball against a finesse-oriented team that lacks the muscle which the Cavs possess.

The Cavaliers were never going to beat the Warriors trying to match their fire power, no one can beat the Warriors in that game. The Cavaliers had to bring the physicality and on Friday they did exactly that. The Cavs may have benefited from some questionable foul calls, but when a team turns it up physically, they will get more calls, whether they are the correct whistles or not.

The Cavs played chippy, and despite the Warriors scoring 116-points, it was an uncomfortable 116-points, and ultimately, win or loss, this is all the Cavaliers can do.

“Had a great vibe in the shootaround, and guys were upbeat, wasn’t no hanging heads or sad,” Cavs coach Tyronn Lue said. “Guys were into it. Golden State’s a tough team. We understand that, but we just felt that we have gotten better each game. And we felt if we played our basketball and make shots and play our brand of basketball, that we could win. So tonight was who we are, we made shots, and defensively I thought we were pretty good.”

Leading the charge for the Cavaliers was LeBron James, who broke Magic Johnson’s NBA Finals triple-double mark, picking up his ninth triple double. No man in NBA history has averaged more points in an elimination game and on Friday night, James poured in 31-points on 50% shooting, 10-boards, and 11-assists. His partner in crime, Kyrie Irving went off season-saving 40-points, which included seven three-pointers. Kevin Love added 23 of his own points along with six three-pointers. Smith had a big game as well, going 5-for-9 from beyond the arc.

On the Warriors side, it was only one guy looked interested in sweeping the Cavs. Kevin Durant scored a team-high 35-points in a desperate attempt at keeping the Warriors in the game on a night where the Cavaliers couldn’t miss a shot.

Granted the Warriors defense was putrid to say the least, but let’s be clear, the Cavs will not be setting multiple scoring records in three straight NBA Finals game. Game 4 may have very well been an anomaly, but the Cavaliers must take the positives out of their win and continue building on the momentum and fight tooth and nail to force the series to come back to Cleveland.

Game 5 will most definitely be a different animal. The Warriors know full and well what is at stake if the series returns to Cleveland. With sour memories of the 2016 NBA Finals, the Warriors will need to treat Game 5 as a must-win contest. Game 4 was a night on which one team looked hell-bent on staying alive, while the other looked reluctant in closing out the series.

Game 5 will be different, and the Cavs better be ready if they want any hope of returning home for a pivotal Game 6.