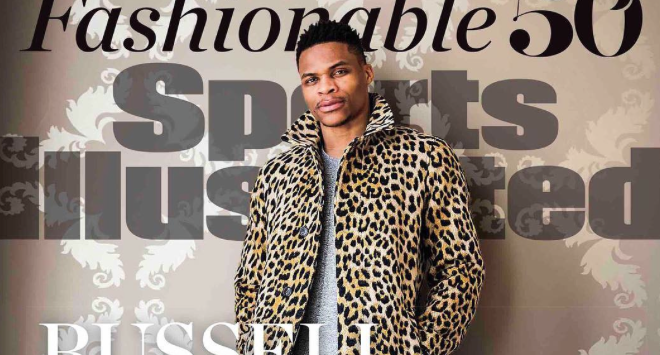 And this one was easy.

When you think fashion and sports, you instantly think Westbrook. The Oklahoma City Thunder superstar never ceases to amaze us with his interesting, refreshing and flamboyant new looks.

???Honored to be SI top fashionable athlete in the #fashionable50 issue. Fashion is a great way to express yourself and I am enjoying doing that. Lol #fashionking #donthateonthebrodie #whynot

On the court, he is a blur. An explosive super-athlete who’s motor never stops running.

Why not buy this outrageous new set of clothes, put it together and make it work? Why not by this pair of ripped jeans with this colourful shirt and make it look fly? He is a showman in every sense of the word and that same showmanship is what is elevating him to heights no one thought possible for the former UCLA alum.

Russell Westbrook is not only and electrifying talent on the court. Off the court, he is a designer, a revolutionary mind, a fashion icon.

This is most definitely not the last time we see Westbrook racking up fashion awards. When he is not on the basketball hardwood, he is looking for wardrobe additions – additions that will undoubtedly impresses the bright lights and cameras that can’t help but follow him.