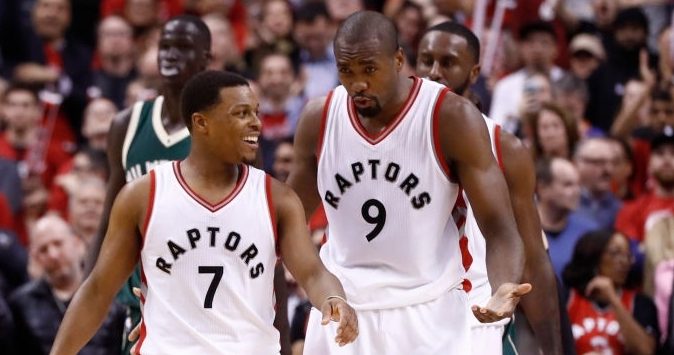 The summer began in very uncertain fashion for the Toronto Raptors, but with the re-signing of Kyle Lowry and Serge Ibaka, the message now is clear.

There is a three-year window, the band is back together and the plan from here on out, is simple – just win. On Friday morning, the intent to win could be felt all around the room as both Ibaka and Lowry had their first press conference since re-signing with the organization along side Raptors’ executive Masai Ujiri.

“Thank you to the Raptors organization for bringing me back to the place I call home,” Lowry began his press conference. “Toronto was home. They believed in me and … gave me the opportunity to lead a team… Of course there were other teams that showed interest,” he said, “but at the end of the day this is the place I wanted to be.”

"Choose the people who believed in you first." – @Klow7 #WeTheNorth pic.twitter.com/Y0cKG2uw9j

Lowry who re-signed with the Raptors on a three-year, $100-million deal will be held responsible with once again leading the Raps into the playoffs, with hopes of the franchise finally getting over the hump and taking down the mighty Cleveland Cavaliers.

Ibaka, who too re-signed with the franchise for three more years with $65-million guaranteed, also had his moment with the Toronto media with whom he expressed his excitement on returning to the franchise.

“I feel like we have unfinished business,” Ibaka said, “It’s always important for a team and players to have a training camp together. We can do a lot better than we did last year. We have a team that can do big things. We have to focus on us.”

Meanwhile, Ujiri also addressed his future with the team about being included in rumours of potential leaving Canada for an available job with the New York Knicks.

With many questions still requiring answers, Friday was an important day for the Raptors, one that ended on a positive note.