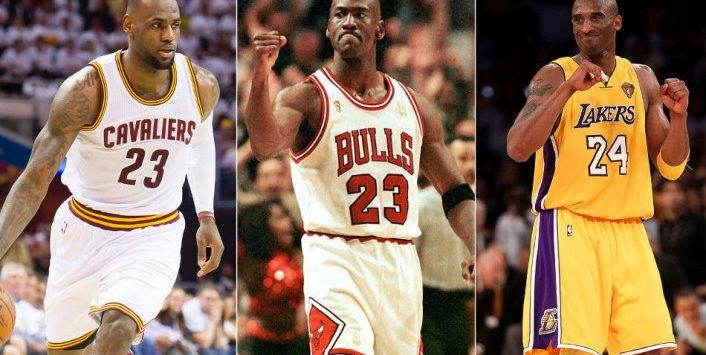 Championships are Nice, but do not Define a Player’s Legacy

Michael Jordan finally responded to LaVar Ball and in the process, commented on the age-old Kobe Bryant versus LeBron James debate.

As per Bay Area HQ, Jordan went on to pick Kobe over ‘The King’ and his way of thinking was pretty simple: “Would I rank LeBron over Kobe in terms of best of all time? No. There’s something about five that beats three. Now he may be better than that, but Kobe won five championships. LeBron won three.”

Now, by the logic, that would pit LeBron lightyears behind Michael Jordan himself, but again, this all goes back to how we access the greatest of all time.

Should we base it on the amount of rings that individuals won in what is defined as a team sport, simply by the fact that there are 11-other guys who can enter each game for each team? Or when it comes to the greats and players in general, should we compare them in a vacuum? Taking awards and trophies out of the equation and emphasizing comparison based on skillset, tools, longevity, and capabilities.

Bill Russell, Sam Jones, and John Havlicek are all NBA greats, but can anyone really make a case that any one of the three are better than Jordan? Russel has 11-rings, Jones has 10, and Havlicek has eight. Jordan has six. Eight does sound better than six, and both men are NBA legends, but not one person on the face of the planet will say that Havlicek is a greater basketball player than Jordan.

Well then, maybe titles isn’t the be all, end all of comparing athletes.

Tracy McGrady has zero rings, yet is set to enter the Hall of Fame. Charles Barkley is considered to be one of the greatest power forwards the game has ever seen, yet he has no rings. Bob Pettit won an NBA ring, and he is an NBA great, is he better than Sir Charles?

Ludicrous to even compare the two.

Maybe it’s time to understand that comparing titles is overrated. Maybe it’s time to consider that there is more to a player’s greatness than the amount of championship banners that a team has hung up in the rafters during his time of employment with the franchise.

Throughout his career, LeBron has averaged 27.1-points, 7.3-rebounds, and 7.0-assists as compared to Kobe’s 25.0-points, 5.2-rebounds, and 4.7-assists. LeBron James is a better physical specimen, he has legendary court vision, he makes everyone around him better, while scoring at will and at an efficient clip.

Recently, Scottie Pippin called LeBron James more of a passer than a scorer. There are four players in NBA history who have averaged more points per game for their career than James – Jordan, Wilt Chamberlain, Elgin Baylor, and Kevin Durant. All four guys are clearly scorers first, yet a pass-first guy, is in fifth all-time. A pass-first guy is seventh on the NBA’s all-time scoring list.

As well, James is in the top-25 for all time steals and 12th for all-time assists.

We can go on for days to break which player is better, which player is the best, and who is better than who. But to use something so simplistic as a ring count is becoming silly, childish, and irrational, and it’s time for many people – analysts and fans – to stop being so fickle.

Unfortunately, not many people will say this, but ‘His Royal Airness’ is wrong and is seemingly living in his own ‘six for six’ hype, but at the very least, he told Mr. LaVar Ball that he could beat him in a game of one-on-one one-legged.