NBA Comes Down on Lakers 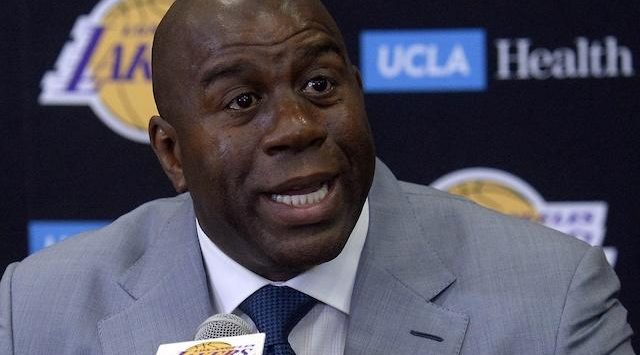 The rookie front office duo of Magic Johnson and General Manager Rob Pelinka found out the hard way of what happens when tampering with a player contracted by a different club.

On Thursday morning, the NBA came down on the Los Angeles Lakers, fining them $500,000 for violating the NBA rules against tampering after it became revealed through an investigation that the team has been in contact with Paul George’s agent while the superstar forward was still in Indiana.

George has since been traded to the Oklahoma City Thunder and is set to enter the final year of his contract. Although rumours have been circulating on George’s desire to play for the Lakers, George has dismissed the claims.

“I grew up a Lakers and a Clippers fan. I idolized Kobe [Bryant],” George said in a statement to Sports Illustrated earlier in the summer. “There will always be a tie here, a connection here. People saying I want to come here, who doesn’t want to play for their hometown? That’s a dream come true, if you’re a kid growing up on the outskirts of L.A., to be the man in your city. But it’s definitely been overstated. For me, it’s all about winning.

“I want to be in a good system, a good team. I want a shot to win it. I’m not a stats guy. I’m playing this game to win and build a legacy of winning. I’ve yet to do that. I’m searching for it. If we get a killer season in Oklahoma, we make the conference finals or upset the Warriors or do something crazy, I’d be dumb to want to leave that.”

While the fine was hefty, the Lakers were subject to greater consequences, so if anything the slight tap on the wrist can just be a learning experience for Johnson and his front office team.

Man for the Job