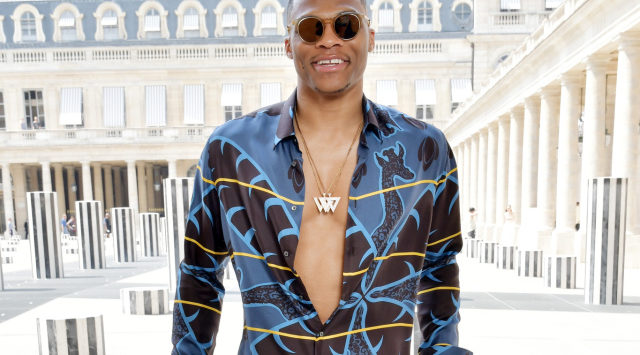 Russell Westbrook to Release His First Book on Style Next Month

It seems like no significant amount of time can go by without Russell Westbrook being mentioned in the same breathe as fashion.

An NBA Most Valuable Player on the floor, Westbrook is a fashion icon off the court and is set to release his first book on style next month. The book Russell Westbrook: Style Divers will be released on September 5th, and will go on sale for $55. A book that will no doubt describe the creative styles that Westbrook has become known for over the past number of years.

“This book is a collection of stylish and inspiring images and text that provide a rare glimpse into Westbrook’s world,” stated the book’s publisher Rizzoli. “Revealing how he uses style as a psychological weapon on and off the court and how he has redefined the role of a contemporary athlete turned cultural figure.”

Earlier in the summer, Oklahoma City Thunder guard was named SI’s most fashionable athlete of the year and it seems like he will divulge valuable secrets of his off court success in his new book. A style which he calls a “psychological weapon”, stay tuned to find out what Westbrook has in store for his readers.

What will Brodie not do in the fashion industry?