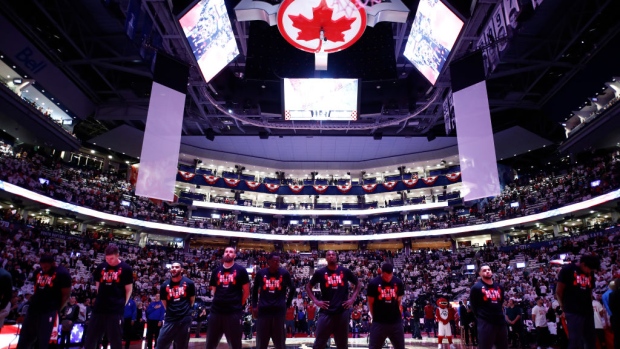 Air Canada Centre to be Renamed to Scotiabank Arena in 2018

Does capitalism have no bounds?

Seems like it was only a matter of time and now it is happening. The Air Canada Centre, the home of the Toronto Raptors will be undergoing a name change in just under a year. By July 2018, it shall be known as the Scotiabank Arena. A building name that has become synonymous with Canada and its basketball culture will rebrand.

Money talks, especially if the money is in the ballpark of $800-million over 20-years. A slight upgrade from the $4-million annual amount that Air Canada has been paying the franchise.

Back in the year 2000, Scotiabank would have been able to purchase four NBA clubs for a sum of $800-million, so the deal will undoubtedly up the value of the franchise and put more money into the pockets of the ownership group, the MLSE.

As far as fans are concerned, who clearly care very little about a bunch of billionaires pocketing a few more millions, this is a partnership which has the potential to help the team on the floor as well.

Assuming the Eastern Conference will live up to its billing of being tighter than ever with Isaiah Thomas reportedly sidelined for an extended amount of time, the Cleveland Cavaliers may not be the obvious, sure-fire winners this year. The Toronto Raptors have clearly committed to winning with this past summer moves and will therefore greatly benefit with the extra income, especially if Masai Ujiri attempts to strike a big deal at the deadline which could force the Raptors into luxury tax territory.

With $40-million annually, the Raptors will now have an added dimension in terms of how they can get better if Ujiri sees the time to win has arrived.