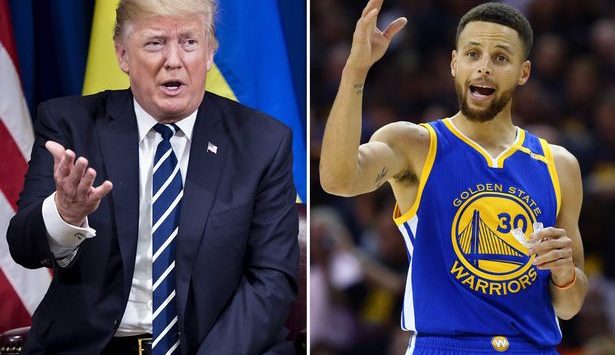 The Golden State Warriors have been highly critical of United States President Donald Trump over the past several months and with the organization reportedly set to discuss whether or not they should make their championship White House visit, Trump has made the Warriors’ decision an easy one.

“Going to the White House is considered a great honor for a championship team. Stephen Curry is hesitating,therefore invitation is withdrawn!” Trump tweeted earlier this morning.

Former unanimous MVP Steph Curry was not the only Warrior to be critical of the Trump. Andre Iguodala, Kevin Durant, and even Head Coach Steve Kerr all fired shots and voiced their displeasure with the president over the past year.

“I don’t want to go,” Curry had reiterated. “That’s kind of the nucleus of my belief…(But) it’s not just me going to the White House. If it was, this would be a pretty short conversation.”

When asked to elaborate, Curry did not shy away from expressing his feelings on President Trump.

“That we don’t stand for basically what our President has – the things that he’s said and the things that he hasn’t said in the right times, that we won’t stand for it,” Curry said. “And by acting and not going, hopefully that will inspire some change when it comes to what we tolerate in this country and what is accepted and what we turn a blind eye to. It’s not just the act of not going there. There are things you have to do on the back end to actually push that message into motion.

“(Athletes are) all trying to do what we can. We’re using our platforms, using our opportunities to shed light on that, so that’s kind of where I stand on it. I don’t think us not going to the White House is going to miraculously make everything better, but this is my opportunity to voice that.”