Will Carter Help the Raptors? 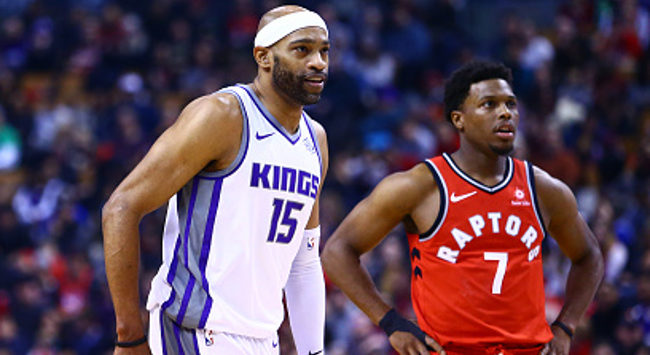 VC isn’t the Answer in Toronto, But Another Former Raptor Just Might be

As Dwyane Wade made his heroic return to Miami, another possible epic return may be just around the corner.

Shortly after the Trade Deadline, the Sacramento Kings let it be known that they plan to waive the newly acquired Joe Johnson. They also are considering to buyout the 41-year old Vince Carter, who in his 20th season has begun showing signs that things may be coming to an end very soon despite still being able to do impressive 360-degree dunks in practice.

Put it this way. There was once a time when Vince Carter dunking was a big deal. Now, every time Carter dunks, it’s really a big deal – for all the wrong reason.

In 35-games this season, the former superstar has been averaging a very mediocre 4.9-points per game on an atrocious 38% shooting from the field. He has also been limited to just 16.8-minutes per game on a very weak and poorly run Sacramento Kings squad.

But rumour has it, the Toronto Raptors may be eying Carter if he is to get bought out by the Kings, setting up a potential homecoming for the one-time beloved Raptors star who nearly 15-years ago had an incredible fall from grace, turning into public enemy number one in Toronto. For the Raptors, and maybe for Carter himself, a homecoming may be just the way to bury the hatchet – to let bygones be bygones – and to give Canada’s greatest basketball story closure.

From a business perspective, the Raptors have everything to gain. The interest in the Raptors from around the league will grow exponentially. Vince Carter, the prodigal son makes his long-awaited return to Toronto after nearly 15-years away from the team that drafted him, a team that he put on the map – a country that he put on the basketball map.

But on the flip-side, the Raptors may very well be boasting the greatest team they have ever put together, and they just may be on the cusp of the franchise’s first ever NBA Finals berth.

Let’s look at their competition in the Eastern Conference.

The Boston Celtics, the team the Raptors recently obliterated may be without All-Star Gordon Hayward for the entire postseason. They lack size in the front court, which inhibits their rebounding efforts and apart from Kyrie Irving, they do not have an established secondary scorer.

How about the Cavaliers, the team the Raptors blew out just a few weeks before handedly taking out the Celtics? Granted LeBron James is still there, but Kevin Love will be returning from hand surgery, the Cavs have also essentially replaced Irving with a dude the Los Angeles Lakers wanted to rid themselves of – Jordan Clarkson. The team’s point guard duo now is George Hill and Jose Calderon, and their new potential starting shooting guard is Rodney Hood, a young kid who has fallen out of favour in Utah and has made a career of being an inconsistent shooter.

Larry Nance is a nice addition, but is he really going to be the difference maker in a series?

The Cavaliers may have gotten better than they were before the Thursday deadline, but in the grand scheme of things, they are far worse than the team that reached the 2017 NBA Finals.

All things considered would a 41-year old shabby veteran be the answer for the Raptors on the buyout market? Will he help the Raptors in anyway against other contenders in their conference? Will he even get playing time over any body on the young, quick, and explosive Raptors bench? Should he?

I’m pretty certain the more questions I ask, the more people should realize that aside from the box office effect that Carter would bring to the team, there really isn’t much that Carter can provide the Raptors on the floor.

At this point, the Raptors have enough of a veteran presence from their starters while C.J. Miles brings that veteran savvy off the bench to keep a very young second unit under control. Maybe the Raptors need something else and to be perfectly honest, their answer has just been cast onto the waiver wire by the Atlanta Hawks.

Ironically a former Raptor, the sharp-shooting Marco Belinelli has just been bought out by the Hawks.

In today’s NBA, you can never have enough shooters on a roster. The Raptors specifically are shooting the three-pointer at a 35.3% mark, good for 24th in the entire NBA. If you are a Raptor fan, you probably have zero desire in knowing which six teams are just behind the Raps, but that is where Belinelli comes into the equation.

The 11-year Italian veteran is having another steady season, averaging 11.4-points a night and more importantly, is shooting 37.2% from long range, a number that should go up on a team like the Raptors, who have a number of players who can drive to the net, pull in the defence, and kick the ball out to the perimeter for open opportunities.

While granted, it would be nice to see Carter back in a Raptors uniform and the potential of a makeup after years of disdain would help the entire Raptors fanbase validate a future number retirement, the Raptors cannot pivot away with a spot in the NBA Finals in sight.

At the end of the day it is all about winning and that is what the Raptors should be hungrily starving for. So if it does come down to choosing between Carter or Belinelli, the answer is really quite simple.