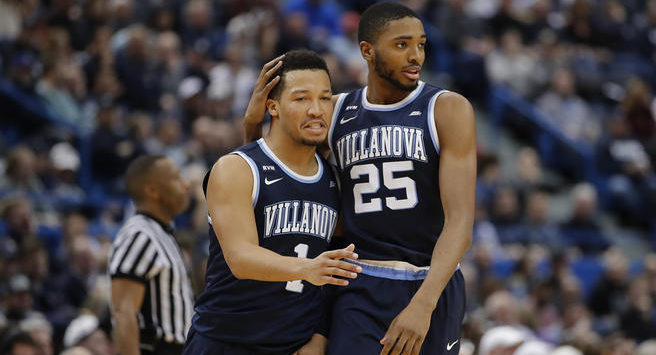 Who Are the Best and Worst Teams Remaining in NCAA Tourney?

So remember when we said we have the perfect bracket?

We’re going to hold off on that claim until next year. So far, the NCAA Tournament has been non-stop madness and every bracket in sight has been busted, ripped up, and destroyed. Following 48 action-packed games, only 16-teams remain with a chance to call themselves tourney champions.

What does the remainder of the field look like? What teams have the edge?

Insanity is really doing the same thing over and over again expecting something different, well assuming no more upsets occur, let’s take a quick look at the basketball programs set to enter the Sweet 16!

Let’s just say the UMBC vs. Kansas State game was by no means a basketball clinic.

Still, the Wildcats aim to continue to play their rugged and not-so-pretty style of basketball to keep pulling upsets in this tournament. While they don’t have an explosive offence, they know how to score just enough points to squeak through and their defense is their calling card. Let’s see how far this run goes!

In typical Jim Boeheim fashion, we see another Syracuse team in the Sweet 16.

How far will they go? Who knows? They are an 11-seed, but really, it’s a Boeheim coached squad, so who knows?

The Syracuse 2-3 zone is tough to prepare for and each of their past three opponents learned that the hard way. Only issue now is they are set to go up against Coach K and the Duke Blue Devils – a team that just may crack the case. Tyus Battle may just need to play out of his mind for the rest of the tournament and who knows, maybe Coach Boeheim has something else up his sleeve.

The Seminoles did everything right in their upset win over number-one seed Xavier.

The downside is, they will have to do that four more times, which is fairly unlikely, but hell, it’s March, so who knows? With Terance Mann and Phil Cofer leading the way, maybe Florida State has some more magic in them. Sometimes you just have to fake it till you make it, and the Seminoles will just have to keep finding a way to upset the rest of the field.

The Cinderella 11-seed Loyola-Chicago were actually one of the hottest teams going into the tournament, and with two buzzer-beaters, are just continuing to roll through March.

This is a team that has no one superstar player, anyone can put the ball in the basket on any given night. This is a team that trusts itself, they have chemistry, and a top-five defense in the entire nation – which kinda helps their chances and potentially upsetting the field and hoisting the national championship.

Talk about a basketball program that was ranked too low, Nevada has been one of the top schools in the nation all season long and they have been proving it to this point with big wins against Texas and second-seeded Cincinnati.

Next up, the Cinderella team.

Taking care of the basketball bodes well for teams in March were mental errors could burn anyone in the Tournament. Nevada just so happens to have the second lowest assist-to-turnover ratio in the nation, and with twins Caleb and Cody Martin leading the charge, the Wolf Pack will try to continue to prove all of their doubters wrong.

The Bulldogs are consistently one of the top teams in March, but just fail to get those big wins late into the tournament.

Will this year be different?

Zach Norvell Jr. has been absolutely unstoppable to this point, and Head Coach Mark Few has his Gonzaga team playing steady basketball, with enough depth to provide their star with the help he will need. The Zags will need to focus on improving on their horrid free throw shooting, but if they are able to do so, they will be a tough out for any team that they are to face.

An elite defensive team, the Mountaineers are set for the toughest test to date with Villanova on the schedule.

Nevertheless, with Jevon Carter leading the charge, Villanova and any other team that stands in West Virginia’s way will struggle and if Carter can turn into a consistent threat from the perimeter, the Mountaineers will become a very scary team to go up against. West Virginia focuses on controlling the tempo of the game and has been doing exactly that through two games in the tournament. If they can keep that up – watch out!

Losing Isaac Haas is huge and may very well be what leads to Purdue’s eventual downfall.

With a date against Texas Tech booked, the Boilermakers will need everyone to step up, most notably Carsen and Vincent Edwards, who could be X-factors on the offensive end. Going against a team that struggles with interior defence, Purdue will need to keep attacking the paint if they wish to continue their tournament run.

Wait isn’t this the football school?

Yeah, that’s the Aggies for you, but while opposing teams shouldn’t fear Johnny Manziel or Von Miller, this Texas A&M basketball squad is legit – and they proved it with their shocking upset over UNC. With a frontline of Tyler Davis, D.J. Hogg, and Robert Williams, the Aggies have a formidable offensive unit that can put in work on the other end of the floor. With a game against the Michigan Wolverines, the football guys will aim to get past a struggling team as they look to continue to make noise in the tournament.

In the National Tournament you need guys who can make shots when they are needed most.

For Texas Tech, they have two of those guys in Xaire Smith and Keenan Evans. While they can defend as a unit, it is Smith and Evans who will determine how far Texas Tech can go. Evans has been showcasing his playmaking abilities all tournament long, creating his own shots, pouring in clutch points, and leading the charge for a Texas Tech team that hopes to continue to make some noise in March Madness.

One of the top offences in the nation annihilated Auburn in the Round of 32 and now shifts their sights at the one-seed Kansas Jayhawks.

To win the National Tournament, a team just has to win six-games and really, if someone gets really hot, they can ride that wave for six nights. That’s what Clemson has been doing after two dominating March Madness wins. They are shooting the lights out, getting steady and effective production from lead senior guard Gabe DeVoe, and have even been playing great all-around defense to this point.

Could their be another upset coming?

With a buzzer-beating win over the six-seed Houston in their back pocket, the Wolverines and moving forward as they are set to take on Texas A&M.

You mean the Football school? Yeah, those guys.

The Wolverines have one of the top defensive units in the entire nation and moving forward will need their offence to step up – something that will start with the struggling Mo Wagner. The Big-10 tournament champions still have time to turn this around and with the way their overall play has looked since February, it is very possible that we will be seeing a very different Wolverines team in the Sweet 16.

After the first two rounds, only two number-one seeds remain.

Kansas is one of them and still have a very dangerous Duke team in their part of the bracket. Nevertheless, with Devonte Graham, they have one of the top players in the entire tournament, and the legendary college coach Bill Self on the sideline. As well, big man Udoka Azubuike is getting healthier by the day and will play a big role for Kansas moving forward. With a date coming up with one of the top offensive teams in the nation in Clemson, the Jayhawks will need Azubuike and Graham to be at their best to help Kansas continue their tournament run.

After dismantling a veteran Buffalo team in the previous round, Kentucky has the easiest path to the Final Four with the top-four seeds in the region all eliminated.

Moreover, in Kevin Knox, John Calipari has a premier scorer who can put the ball in the hole in many different ways. After dropping 27-points against Buffalo, potential lottery pick Shai Gilgeous-Alexander provides the Wildcats with an extra burst of offence for the remainder of the tournament. Although the Wildcats came into the tournament struggling, they are carrying momentum into their next game and have the schedule working in their favour.

Outside of the number-one team on the list, no one has looked as dominant thus far as the Duke Blue Devils.

Marvin Bagley is the real deal. He is explosive, athletic, long, can shoot, and is virtually unguardable. Behind Coach K’s coaching, the Blue Devils have depth, a strong backcourt in Gary Trent Jr. and Grayson Allen, and above all, Bagley is by far the best player in the entire tournament.

Duke and Villanova may very well be headed for a classic bout in the tournament semi-finals.

Easy, blow out wins is what sums up the first two rounds for Villanova.

Predicted lottery pick Mikal Bridges looks like he will not miss another shot from outside any time soon and veteran point guard Jalen Brunson is one of the top players in the entire tournament. For a team eager to win the entire tournament, there is really nothing else required. Villanova has great coaching on the sidelines, a veteran team, and an incredible back court.

This may be Villanova’s year again.