Exclusive Interview: What do the Wizards Really think of the Raptors?

For Washington Wizards big man Marcin Gortat, the Toronto Raptors haven’t received the ultimate respect from all across the NBA just yet. Of course, he agrees the same holds true for his own Wizards team who similar to the Raptors has stumbled in the playoffs the last number of seasons.

But do the Wizards see the Raptors as legitimate competition – you better believe they do!

“They have respect from all of us, we all know how good they are,” says Wizards back-up guard Tomas Satoransky. “I don’t know about anyone else and I don’t really care what they think, but we know they are one of the best teams in the NBA and we really respect them and we know we have to play our best basketball to be able to beat them, especially here [in Toronto]. They prove it all season long, they’re in first place and doing a great job. They get a lot of respect from us, our coaching staff, and from Washington.”

After rolling to a franchise-record 59-win season, locking up the team’s first ever one-seed, it has been extremely intriguing to see the reception the Raptors have received from the league. A team that performs all regular season long, yet fails to show up when it matters. Kyle Lowry turns into a shell of himself and DeMar DeRozan gets shut down, and the Toronto Raptors isolation-based offence struggles each and every game.

This year, everything has seemed different for months now and two games into the playoffs, the Raptors are proving to the league that their retooled offence is for real – the culture change is most definitely a thing!

They are ready for a whole new level and intensity of basketball with the postseason upon us, but how does their opposition see the playoff from their lens?

“You can just see more people hustling for the ball,” Explains Satoransky, who spent plenty of time in a key role for the Wizards throughout the regular season with All-Star John Wall absent due to injury. “Every possession matters. That’s what it’s all about. It’s great to be a part of it. Lot’s of scouting goes into these games obviously, because you are really focusing on one game at a time.” 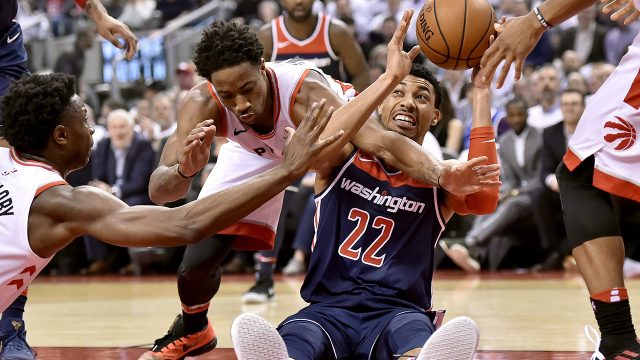 Gortat, a veteran in this league, echoes Satoransky’s sentiments.

“Intensity is different,” confirms The Polish Hammer. “People fight for the ball, every possession counts. Rotation is getting tighter, a lot of veterans are playing. You’re anxious, you want to be there already, you want to start the game and play the game. You just get anxious, but at the end of the day you are doing everything you’ve been doing for the past year, so you don’t have to worry about anything.”

Despite falling into a 2-0 hole, the mindset for the Wizards doesn’t change, despite the pressures of the postseason mounting. The key of course in such pressurized games is to stay the course, make adjustments and focus on getting better for the next game.

“Just used to it now,” Says key Wizards reserve Mike Scott. “Try to go out there, stay locked in and perform. Just go out there and play my game. It’s always tough to play here [Toronto], the crowd is always loud, always sold out. They’re always behind their team. It’s tough to play here, especially in the playoffs.”

As the series shifts to Washington, the Wizards are looking forward to getting a fresh start to the playoffs on their home floor in an effort to get back into the series.

“Obviously it’s better to be at home,” Says Gortat. “You get to sleep in your own bed, see your family, but at the end of the day, obviously the crowd is important. Toronto has a great crowd and we aren’t worried about that, we stay focused on everything we are supposed to do.”

For a player like Satoransky who has played basketball all over the world, he realizes the importance of playing in front of the Wizards home crowd.

The postseason is a whole different animal and the pressure and intensity of each game as expressed by the players makes us all realize how truly important each individual game is.