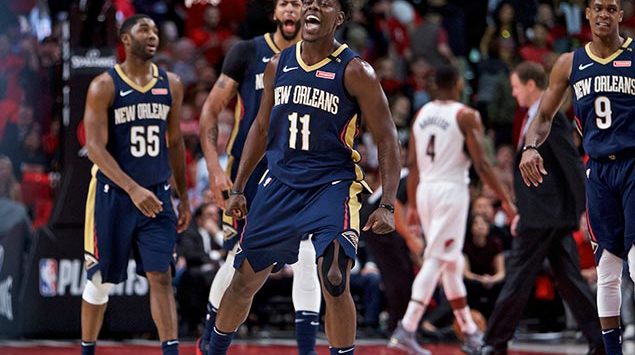 New Orleans Pelicans Move on, Sweep Blazers Out of the NBA Postseason

Call it an upset of sorts.

On Saturday afternoon, the New Orleans Pelicans took care of the Portland Trailblazers, giving the Blazers a quick boot from the 2018 NBA playoffs. Combining for an incredible 88-points in Game 4, Jrue Holiday and Anthony Davis allowed the fifth-seed Pelicans to complete the sweep over Portland. They shall now await the winner of the Golden State Warriors-San Antonio Spurs series.

“I just tried to go out every game and play to the best of my ability so I can help the team win,” Davis said. “Just trying to build a legacy in New Orleans, and let people know that we’re for real.”

Saturday was quite the start.

Finishing with a game-high 47-points, Davis was backed by a strong 41-point performance from Holiday, marking the most points scored by a teammate duo in an NBA playoff game since Jon Havlicek and Jo-Jo White scored 88-points back in 1973.

“I’m sure it meant a lot. In our six years previous to this year, he had only been to the playoffs once. And they played Golden State and got swept. You know, he’s had it hard,” said Blazers star Damian Lillard, who was handedly shut down by Holiday in this quick four-game series. “I couldn’t imagine what it’s like going all these years with not being able to compete in the postseason when you’re that level of player. So I congratulate him. I wish his success hadn’t come against us, but at the end of the day, as a competitor, you can’t be a poor sport. You’ve gotta give credit where it’s due.”

It’s now back to the drawing board for the Blazers as Davis and the Pelicans seek to continue rolling in this year’s playoffs.