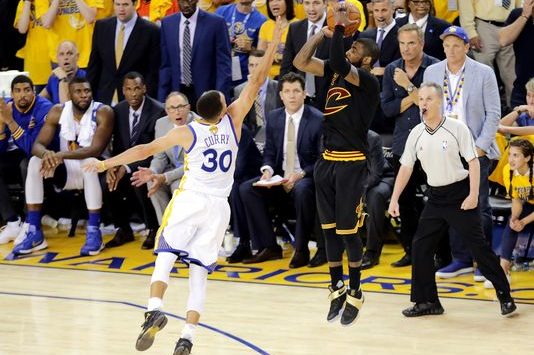 Defining Moments of the Cavs-Warriors Rivalry

With less than a minute remaining in Game 3 of the 2017 NBA Finals, the Warriors were down 113-111. Up two games to none, Golden State was at risk of letting Cleveland back into the series, and we all know how that turned out the previous year.

With his team in trouble, Kevin Durant corralled a Kyle Korver miss,  and calmly dribbled down the court, before draining a go-ahead three-pointer over the outstretched hand of Lebron James.

Golden State would go on to win the game, eventually taking the series in 5 games.

The fact that Durant hit the shot over Lebron provided it with symbolic meaning, with some declaring that the Warriors star had surpassed James as the game’s premier player. Durant would go on to win Finals MVP.

Durant’s shot provided validation for both the Warriors, and Durant himself, proving that their oft-criticized decision to join forces was the right move.

In the last minute of the 2016 Finals, Kyrie Irving mad a huge shot of his own.

With Game 7 tied at 89, Irving hit the go-ahead three-pointer over Stephen Curry. Cleveland would hold on for the 93-89 win, completing an incredible comeback from 3-1 down in the series.

Besides its obvious significance, Irving’s shot reflects part of what made those Cavs so dangerous. Teams that had their hands full with Lebron could hardly hope to contain an additional all-star, especially one who could step up at the end of games like Kyrie did. With Irving in Boston, does Lebron have the help he needs to take down the Warriors?

Kyrie’s game-winner illustrates what the Cavaliers once had, and what, so far, appears absent from this year’s edition.

During the 4th quarter of Game 6, with the Warriors trying to come back, Curry drove the lane, only to get blocked by Lebron, his shot swatted away with effortlessness reminiscent of the way in which one would swat a fly.

Lebron actually blocked Curry a total of 6 times during the 2016 Finals. However, this one was particularly emphatic, with James memorably trash-talking Steph after the shot.

The block can be seen as Lebron re-affirming his dominance atop the NBA food chain. Coming off a regular season for the ages, Curry was all the rage. Talk of a new era based around long-range shooting was prevalent. Steph’s 3-point ability was seen as a more attainable, and thus relatable skill, compared to James’ natural physical gifts of size and strength.

With plays such as this blocked shot, Lebron effectively bullied Curry and the Warriors, both physically and mentally. James showed that sometimes, old-school brawn wins out over small-ball and 3-point shooting.

Giving the Cavs a Shot

In 2016, with Golden State on their way to a Game 4 win, and a 3-1 series lead, Draymond Green committed an act he surely regrets.

Tangled with James, Green fell to the court. As Lebron stepped over him, the Warriors star swung his arm, hitting James in the groin. Green was given a flagrant foul, his fourth of the playoffs, resulting in a Game 5 suspension.

Cleveland would go on to win Game 5. Although Green would come back for the final two games, the momentum had already begun to shift, and the rest is history.

If Green had kept his hands to himself, who knows how different the 2016 Finals, and the NBA today, would be?

Behind 2-1 in the 2015 Finals, Warriors head coach Steve Kerr inserted Andre Iguodala into the starting lineup, taking out Andrew Bogut. From then on, Golden State was off to the races.

The importance of this change cannot be understated.

Iguodala’s playmaking fuelled Golden State’s ball movement, opening up a whole new array of possibilities for the Warriors. Meanwhile, with the undersized, but versatile Green shifted over to the 5 in place of the more traditional centre Bogut, Golden State’s shift towards a more space-oriented version of small-ball was complete. Vice-versa, the Cavaliers were forced to adjust. The shift took Cleveland centre Timofey Mozgov, an impact player to that point, out of the game, paving the way for a 6-game Warriors series win, with Iguodala named Finals MVP.

The unit of Green, Iguodala, Curry, Klay Thompson, and now Durant became known as the vaunted “Death Lineup,” and the Warriors were never the same. To be fair, they were already a great team, having won 67 games that season. This was not the NBA version of Kelly Leak joining the Bad News Bears. However, the change took Golden State to a new level, paving the way for their emergence as possibly the greatest offence the league has ever seen.

NBA analyst and former all-star Antonio Davis testified to the Death Lineup’s broader influence. “What we’re witnessing here is a change in the way the game’s being played. The more skill you have, regardless of size and physical attributes, you can win.”