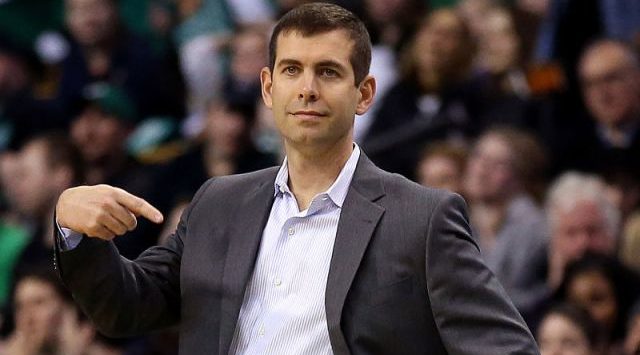 Is Brad Stevens the Best Head Coach in the NBA?

If you’ve only recently tuned in to the NBA playoffs, you may be asking: “How did Boston get this far? Weren’t they left for dead just a few weeks ago?”

The answer comes down to one man: Celtics head coach Brad Stevens.

Entering the 2017-2018 season, Boston fans had rightfully high hopes. Prized free agent acquisition Gordon Hayward was expected to team with Kyrie Irving, Al Horford and a host of emerging young talent, leading the Celtics to heights that they had not experienced since the days of Kevin Garnett, Paul Pierce, Ray Allen and Rajon Rondo. The basketball gods, however, had other plans.

Boston’s designs on contending were seemingly dashed on opening night, when Hayward went down with a gruesome knee injury, ending his season. Other key players such as Marcus Morris and Marcus Smart were limited to 54 games each. Still, behind the league’s best defence, and the best year of Irving’s career, the Celtics persevered, finishing second in the Eastern Conference. However, Irving underwent surgery on his own knee issue late in the campaign, ruling him out for the playoffs. With seemingly one injury too many, it seemed like a lost season for Boston.

With their myriad ailments, the Celtics were viewed as an easy out in the playoffs, with many (including this writer) picking them to fall in their second-round match up against Philadelphia. However, the Celtics prevailed, and with relative ease, dispatching the 76ers in 5 games. They continued their improbable run on Sunday, crushing Cleveland 108-83. Perhaps more impressively, they held the previously-unstoppable Lebron James to 15 points on 5-16 shooting.

How are the Celtics doing this? Perhaps the Black Mamba can provide some insight. “I think (Brad Stevens) observes a lot better (than other NBA coaches),” says Lakers legend Kobe Bryant of Boston’s head coach. “He observes the game, the flow of the game… He can look at players and their tendencies. And then you can file that away.”

Kobe points to Boston’s game-winning possession of Game 3 of the second round as evidence of Stevens’ savvy. When Boston’s leader called a play that drew the Sixers away from the basket, providing Horford with lighter coverage with which to hit the go-ahead shot, Bryant “had to laugh… It was prime misdirection… He used Philly’s aggressiveness and youth against them… He’s able to look at the game and make adjustments on the fly. He’s a great coach, man.”

Indeed, Stevens is a great coach. Basketball fans have long known this. This, after all, is a man who led a mid-major school to back-to-back national final appearances. Still, coaching success at the collegiate level does not necessarily translate to greatness in the pros. John Calipari and Rick Pitino are two Hall of Fame NCAA coaches who experienced middling results in the NBA. How has Stevens made it work?

Boston’s head coach has been able to strike a balance between calm and firmness. Not known to scream instructions at players, he is characterized by an oft-stoic demeanor. However, Stevens is not afraid to send a message when necessary. “If guys aren’t doing their jobs,” says Horford, “they just won’t play.”

At his core, Stevens is a no-B.S. head coach, focused on identifying his players’ mistakes, and working to make sure they will not happen again. Constructive criticism such as “We didn’t get this rebound” and “You should have made this rotation earlier” is common, rather than comments about a player’s “character.” The coach himself sheds some light on his coaching philosophy:

“My goal is to simplify their lives with regard to the game of basketball,” Stevens says. “When we enter practice I don’t want to waste their time, I want to get in and out of the gym as soon as possible. To do that you have to (make sure the players have) the right amount of information: not too much, not too little.”

Talk of the Celtics’ run cannot go without mention of their actual players. Jayson Tatum and Jaylen Brown have shown maturity and talent beyond their years. Terry Rozier is doing things that no one expected of Boston’s backup point guard coming into the season. Aron Baynes is a rock on defence, and Horford remains a versatile jack-of-all-trades on both ends. Still, on a team that has overcome seemingly insurmountable obstacles, credit must be given where credit is due: Beyond successful from the amateurs to the NBA, Brad Stevens just might be the best coach in the game right now.