BallnRoll’s Second Mock Draft Instalment – How the Draft Should Go

The week of the NBA draft is here.

DeAndre Ayton has been all but assured that he will remain the number one overall pick. The Phoenix Suns are on the clock and Ayton has only worked out for them alone allowing him to be an essential lock for the first overall pick. Other big names to watch out for in the lottery are the likes of Marvin Bagley III, Mo Bamba, and international sensation Luka Doncic, while further down the boards, you can see big collegiate names such as Grayson Allen and Donte DiVincenzo.

That being said, should the Suns be risking their first overall pick on Ayton? Are there better options? How should the 2018 NBA Draft go down?

With the draft quickly approaching, BallnRoll presents its final instalment of its 2018 mock draft! 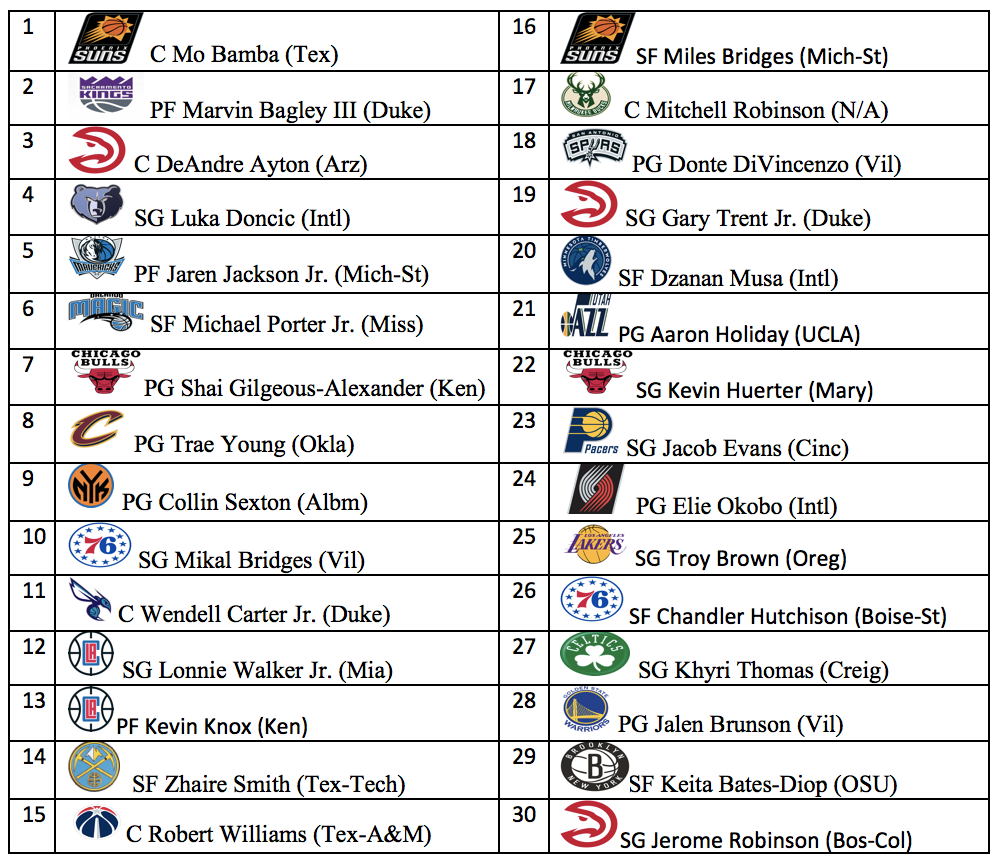 While the odds of Ayton falling out of the first overall pick are very slim, both Bagley and Bamba present more athletic options for the Suns as well as two players who can perform on both ends of the floor. Ayton appears to be the safer pick with a far more advanced and polished offensive game at this point in the development process, but in terms of project-ablity, Bamba and Bagley hold a definite edge in the competition.

A group of three point guards have established themselves as the best ball handlers of the class and are all projected to go somewhere within the top ten. With a big man-heavy top half, it will be interesting to monitor which of these three young prospects come off the board first.

The Chicago Bulls have been rumoured to be unhappy with the development of Kris Dunn and may explore drafting point guard. That being said, Shai Gilgeous-Alexander has not been the sexy name of the trio, but he may have most upside given his size and skillset. Trae Young is the high-risk, high-reward guy in the draft who will struggle defending his position, as well as dealing with bigger and stronger players who will likewise defend him. Nevertheless, he does have the ability to create his own shot, can be a very good playmaker, and of course is billed as one of the draft’s best shooters.

A few more interesting names who will get popped in the first round are the three Villonova Wildcats. Mikal Bridges has a very Klay Thompson-like game to him in the sense that he can stretch the court, shoot, and defend one-through-three, while Donte DiVincenzo has seen his stock skyrocket since the National Championship game. Jalen Brunson will be an intriguing name to monitor as a player who has excelled in college, but will need to make a few adjustments for his collegiate success to translate over into the NBA. While LiAngelo Ball will more than likely not hear his name get called in round two, a few other names will.

Grayson Allen is the most notable prospect of the bunch. A household name in collegiate basketball, Allen has a national championship on his resume, is a gritty player who can shoot as well as attack the paint with good body control and aggression. He is a proven winner, with an attitude and the intangibles that NBA teams covet on draft day.

Other interesting names in the draft is Michigan star Moritz Wagner, defensive-minded guard Jevon Carter out of West Virginia, and even Kansas’ Devonte Graham.

June 21 is coming. It will be a guard-heavy draft filled with exciting player who will add more excitement to the league!