How Will the Offseason Play Out?

With the NBA Draft just hours away, it’s almost time to shift our focus to free agency.

A class which includes the likes of LeBron James, Chris Paul, and Paul George. Along with the the stacked free agent class, there are plenty of big name players that find themselves in the heat of trade rumours – Kawhi Leonard, Kevin Love, and Kemba Walker to name a few. Something will have to give this season as teams look to either load up and prepare to commit, or start things from scratch and look towards a brighter future.

The BallnRoll staff has decided to sit down and offer their predictions for the landing spots for the League’s top-10 pending free agents, as well as some of the bigger names that have been mentioned on the trade block. 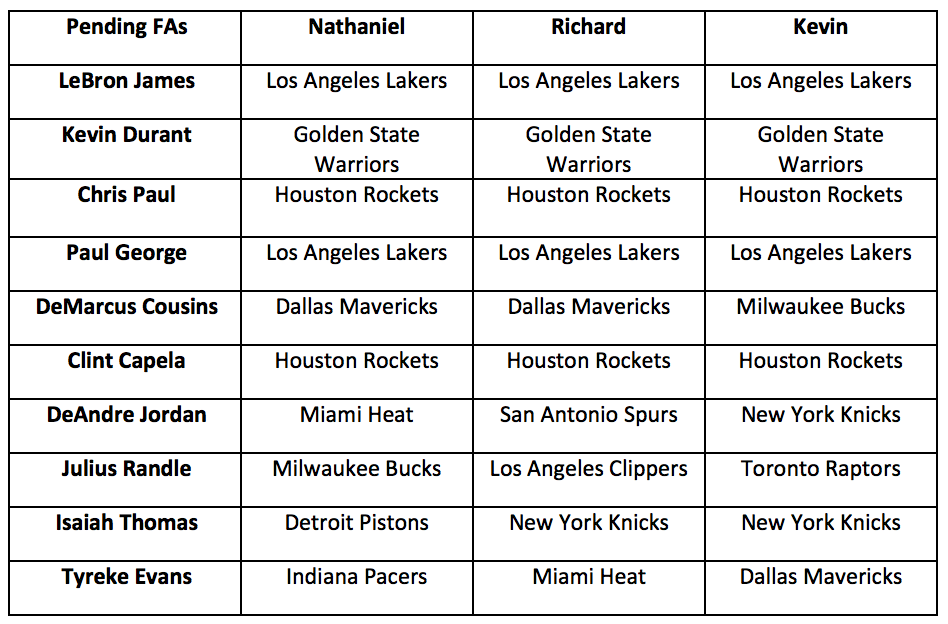 While Kevin Durant and Chris Paul are expected to remain on their current teams, reports have linked both Paul George and LeBron James to the Los Angeles Lakers. Meanwhile, DeAndre Jordan is rumoured to be unhappy with the Los Angeles Clipper and has been said to be eying a return to his home state. The big man has a player option for next season, which Jordan is believed to aiming to decline.

A few other interesting names in the top-10 are those of Isaiah Thomas, Tyreke Evans, and Julius Randle, two of whom had career years, while Thomas struggled upon returning from offseason hip surgery.

Kawhi Leonard is more than likely never playing a single game with the San Antonio Spurs ever again, yet there is still a glimmer of hope amongst the Spurs organization that they can fix relations with the disgruntled superstar. Multiple sources have stated that Leonard wants to return home to California in a trade with the Los Angeles Lakers, while the Boston Celtics and Philadelphia 76ers are two other teams who have jumped into the Leonard sweepstakes.

In an effort to dump salary and attempt to rebuild, the Memphis Grizzlies have reported made their fourth overall pick available alongside Chandler Parsons. Kevin Love, Serge Ibaka, and Kemba Walker are other names who have been mentioned in recent trade rumours as well.

How will this summer shake out around the NBA?