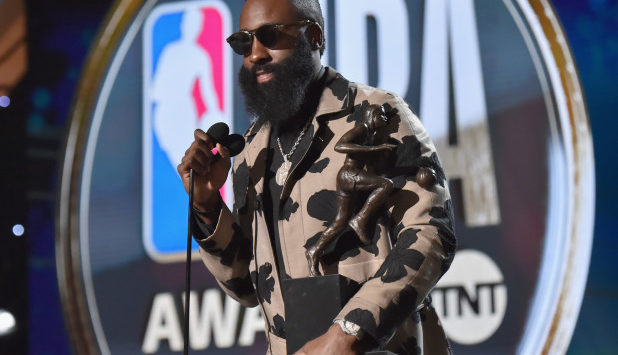 The NBA held its 2nd annual awards show Monday night. While there were plenty of speeches, music and the usual ceremonial pomp, the real reason the event was held was to celebrate the achievement’s of the league’s best. Here’s a recap of what went down, and who won what:

The award caps off a spectacular season for Houston’s bearded star. Harden averaged a league-leading 30.4 PPG, along with 8.8 APG and 5.4 RPG, while leading the Rockets to an NBA-high 65 wins.

“The last four years have been like knocking on the door, knocking on the door,” Harden said. “Now the moment is finally here. Just every single year, you try to come back and be better than you were the year before, and just to be holding that trophy finally, it means a lot. But it doesn’t stop here. We’ve got a long way to go. But it feels good to have it though.”

Amazingly, Harden became the 3rd member of the 2011-2012 Oklahoma City Thunder to be named MVP, joining Kevin Durant and Russell Westbrook. The three superstars were all drafted by the team in consecutive years.

Rookie of the Year – Ben Simmons

Overcoming some controversy surrounding his rookie status, Simmons took home the Rookie of the Year award, completing a successful comeback from a foot injury that caused him to miss what would have been his rookie season.

I’d say the greatest memory or moment was finishing my season,” Simmons said. “Obviously I had my foot the first season and wasn’t able to play, and to be able to be on the floor and accomplish that childhood dream has been amazing.”

Coach of the Year – Dwane Casey

Already with a different team, Dwane Casey was honoured as Coach of the Year for his work with the Toronto Raptors this season.

Currently the head coach of the Detroit Pistons, Casey led the Raptors to a franchise-record 59 wins this season. He was able to modernize the team’s style of play and overall culture, while integrating a host of fresh, young talent in the process. It resulted in Toronto’s first ever regular season conference championship.

However, a second-round loss to Cleveland resulted in Casey’s firing. He became the first coach since George Karl in 2012-13 to win COY and subsequently be fired.

“A lot of the same core guys have been there and they grew,” Casey said. “That’s a regret you have that we made it to the Eastern Conference finals, but we couldn’t get over the hump to get to The Finals to try to win a championship. So that’s always a regret. But, again, I can still hold my head high from what we had and what we grew from and nobody can ever take that away.”

While Utah’s other finalists may have come home empty-handed, Gobert was rewarded for his defensive excellence with his first Defensive Player of the Year award.

“Defense to me is something that when you watch a game you don’t really pay attention to defense unless you’re very — unless you’re a specialist,” Gobert said. “People watch the points, they watch the highlights. But the defense I think helps the offense. I think when you’re a very good defensive team — it’s very rare a team wins a championship when you’re not a very good defensive team.

“I think when you’re a very good defensive team you give yourself a chance every night, on the road, at home, it’s a big factor and something to build on.”

New Orleans’ Anthony Davis and Philadelphia’s Joel Embiid were the other finalists.

In his 13th year in the NBA, Williams capped off his best season by winning his 2nd Sixth Man of the Year award, joining the 2014-15 honour he received while a member of the Raptors.

Williams averaged 22.6 PPG and 5.3 APG, keeping the Los Angeles Clippers in playoff contention despite numerous injuries to other key players.

The veteran guard came off the bench in 60 out of his 79 games. Over a season in which he received all-star consideration, Williams led the league in 4th quarter points and scoring average.

“I go out on the floor. I play as hard as I can and I live with the results,” Williams said. “It’s extremely exciting to be recognized for it. To have an opportunity to win a Sixth Man, this being my second in my career, being one of the guys that go out there night in and night out, that’s in that lane.

“You’ve got the Jamal Crawfords, Eric Gordons,  (Fred) VanVleet, we’re like special teams and we go out there and try to do the best we can for our respective games and turn the course of how games go. So to be recognized for that tonight is an amazing accomplishment.”

Williams topped Houston’s Gordon and Toronto’s Vanvleet for the award.

Who saw Oladipo’s season coming? The answer may be nobody, not even the Pacers guard himself.

“I put in a lot of work, obviously it was a great season,” Oladipo said. “I’m blessed and thankful. Sometimes you get to points in your life where you do surprise yourself. But at the end of the day I’m thankful. It’s only the beginning for me and the Pacers organization, so I’m looking forward to the future.”

Oladipo averaged 23.1 PPG in his first season on the Pacers. He also led the league in steals, while averaging career highs across the board.

Oladipo led a surprising Indiana team to the playoffs, excelling on both ends of the court, and becoming a much more efficient scorer despite shouldering a much larger burden than he had on previous teams.

Runners up for the award included Houston’s Clint Capela and Brooklyn’s Spencer Dinwiddie.