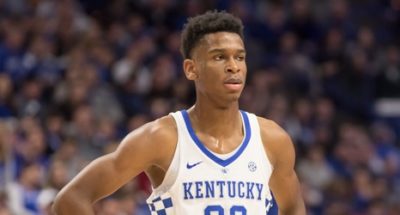 Though the Toronto Raptors do not currently have a pick in Thursday’s NBA draft, it might not stay that way for long.

According to Marc Stein of the New York Times, the Raps are seeking to find a way into the top 10 of the draft, with an eye on Kentucky point guard Shai Gilgeous-Alexander. Stein reports that the team is willing to go great lengths to get what they want:

According to one league source, no one on Toronto's roster is off limits as the Raptors pursue a top-10 pick https://t.co/AZzCv8fPXD

Gilgeous-Alexander, a Hamilton native, averaged 14.4 PPG, 5.1 APG and 1.6 SPG during his freshman year for the Wildcats.

Tony Jones of the Salt Lake Tribune added that Raptors star Kyle Lowry has been mentioned in trade rumors and is “very available.”

If Toronto obtains a young, talented point guard like Gilgeous-Alexander, at would cost would it come to their veteran core? Are the Raptors willing to move on from Lowry, in favour of Delon Wright, Fred VanVleet and whoever they might draft?

This is an intriguing development worth keeping an eye on, as it could provide an indication of Toronto’s future direction.