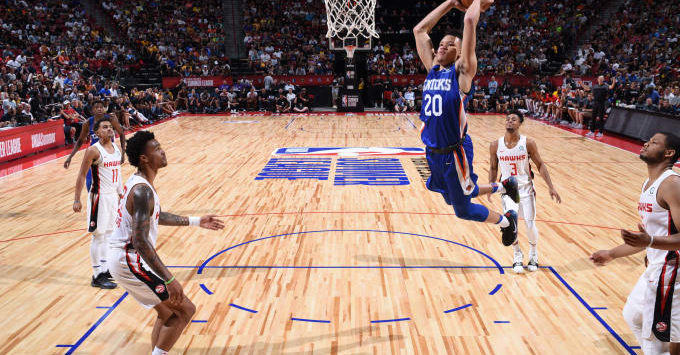 The Standouts and No-Shows of Las Vegas NBA Summer League

NBA Summer League is in full swing as the basketball world gets its early glimpses of the next wave of the League’s best young talent.

With the draft in our rear-view mirror, it is now time for rookies to start proving they are here to stay, for undrafted free agents to grind their way onto an NBA roster and secure a contract, and for veterans to show teams that they still belong in the League. Like every year, the summer circuit has its fair share of standouts and no shows, and this time around things are no different.

Startin off hot, we take a quick look at the players who have shown that they belong and those that have struggled to get off and running.

It was funny the first time, but now it’s simply sad to see how misguided the ‘crying Knicks fan’ is.

Kevin Knox was met with criticism by a wave of Knicks fans after the New York club opted to select the Kentucky product over the highly touted Michael Porter – who may not even play this entire season as he recovers from back problems. Simply put, Knox put his head down and went straight to work turning in some of the best performances of this summer.

Pouring in multiple 20-plus point games, Knox is young, explosive, doesn’t shy away from contact and is incredibly athletic. He can run the floor extremely well for a taller player, and while the outside shot is not consistently there yet, he is tenacious and plays with confidence.

Lanky and filled with potential, Knox has the Knicks now salivating over the thought of pairing him with Kristaps Porzingis in the front court for years to come.

He was not the most hyped point guard entering the NBA Draft, but Shai Gilgeous-Alexander has the potential to be the best of them all.

Similar to Knox, the tall and lanky guard is also a Kentucky product and much like Knox, he has been balling out early on in his NBA career, pouring in 51-points through his first three games. The Los Angeles Clippers should start to get really excited about what they have in their first round selection.

Showing a little bit of everything, Gilgeous-Alexander was billed as a guard with great size and defensive prowess, but through three Summer League games, he has shown great poise running the offense, an ability to create his own shot or drive to the hoop with athleticism, as well as distributing the basketball to his teammates.

Should we even be surprised anymore when a John Calipari guy immediately finds success in the NBA?

While the Sacramento Kings were hoping to see Marvin Bagley come out in Summer League and perform like a top overall pick, it has been the all-but-forgotten Harry Giles who has come on the scene with a purpose.

Seeing his draft stock slide last season due to a plethora of injuries, Giles missed his rookie year rehabbing following ACL-reconstruction surgery. He was a high-risk, high-reward selection by the Kings a year prior and despite having top-5 pick talent, Giles’ health history saw him fall to the kings at No. 20.

Now healthy, Giles has been showing why he is legit.

Long and athletic, Giles has been an absolute beast on the defensive side of the ball, getting his hand in passing lanes, blocking shots and showing the necessary lateral quickness to defend multiple positions. Furthermore, he can become a double-double machine and if he can stay healthy, the Kings may have something in Giles and Bagley.

While the NBA Summer League will by no means define Trae Young, the Oklahoma product has struggled mightily with his shot prior to going off yesterday with seven-three pointers.

The shot and the range is there, and despite his lack of size, Young is able to create his own shot unlike any other rookie in the class. Furthermore he has great court awareness and likes getting his teammates involved by facilitating the basketball.

Nevertheless, Young has gone 6-for-35 from deep prior to yesterday’s offensive explosion in which he shot 7-for-19 from the field – still by no means a glamorous number, but a step in the right direction. After swapping pick with the Dallas Mavericks on draft night, there is a lot of pressure on Young’s shoulders, but it is far too early to label the young Atlanta Hawks guard as a streaky shooter on the pro level.

One of college basketball’s best players has struggled to get into the flow of things to this point in Summer League action.

A star and two-time national champion with the Villanova Wildcats, Brunson has been billed to own a high basketball IQ, he is a good playmaker with the ability to do a lot of different things well. One thing he cannot do well is shoot the basketball, and that flaw has been showing early on.

Averaging just seven points and 4.3-assists per game, Brunson is shooting an atrocious 19.4-percent from the field, which includes 23.1-percent from beyond the arc. It’s been a difficult start for the rookie who entered the League after his senior year of school. It will be interesting to see if he can catch some Kyle Kuzma magic as his rookie campaign continues.