Could the Raptors Really Get Kawhi? 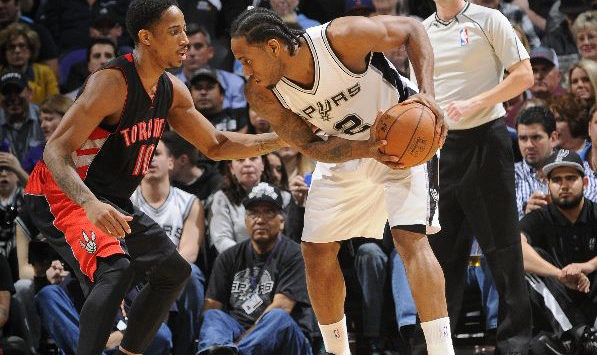 Don’t look now, but the Toronto Raptors might have a legitimate shot at acquiring Kawhi Leonard.

On Thursday, betting site OddShark placed the Raptors at even odds to trade for the disgruntled Spurs superstar, the best of any team. One would be best advised to take that with a grain of salt.

However, Toronto does appear to have a very real shot at landing Leonard. As ESPN’s Brian Windhorst explained on Sportsnet 590 The FAN Wednesday, the Raps possess the necessary young, affordable talent to entice the Spurs, while other potential suitors Philadelphia and Boston seem unwilling to part with theirs. Combined with the (Eastern Conference) championship window that appears to have been opened with Lebron James’ move west, and you just may have what would easily rank as the biggest acquisition in Raptors history.

How would such a deal happen? And should it happen from Toronto’s standpoint? Let’s take a look.

Whether Toronto has enough to get Leonard is ultimately up to the Spurs. However, it would probably take a combination of:

At least one first-round pick.

Leonard is due to make approximately $21 million in 2018-2019. This is less than either of the Raptors’ star duo, so Toronto would need to match salaries. At $27 million, DeRozan is closer to Leonard’s salary than Lowry ($31 million), so he might have to go. The Raptors might also have to take on Pau Gasol, with Norman Powell going the  other way, to make it work, money-wise.

At 28, DeRozan is also younger than Lowry (32), potentially making him a more attractive acquisition for San Antonio.

So DeRozan would probably have to be included in any potential Leonard trade, along with some combination of first-rounders and young talent (and possibly Powell).

Could such a deal actually happen? For the Spurs, DeRozan would at least provide a stopgap at Leonard’s position, helping them remain competitive until DeMar’s salary comes off the books in a few years, at which point San Antonio would have enough space to go after another superstar. Ideally, such a player would be complemented by the by-then maturing players received from the Raptors (Siakam, OG, etc.)

From Toronto’s standpoint, the deal makes sense, provided Leonard is healthy (a big if). One of the league’s true elite players in the 2 regular seasons before his injury, Kawhi has been just as good, if not better, throughout his playoff career. The 2014 NBA Finals MVP, when we last saw Leonard in a playoff format, he was balling out of his mind, to the tune of 27.7 PPG, 7.8 RPG and 4.6 APG on an astronomical .672 True Shooting Percentage. If you’ve watched any Raptors playoff basketball over the past 5 years, you don’t need me to give you DeRozan’s numbers to know that’s a whole lot better than what DeMar (or Lowry) has done in his postseason career.

Though DeRozan and Lowry can win 50 games in their sleep, neither has shown that they can consistently produce at the same level in the playoffs. Leonard represents an opportunity to get to the next level, something that seems closer then ever in the wake of LeBron’s departure. During the regular season, Kawhi could share the load with Lowry, allowing him to work his way back up to 100% by playoff time.

If the trade comes through, there will undoubtedly be fans who are sad to see DeRozan go. The loss of a few of their young pieces, so important to the team’s vaunted bench unit, could hurt too. However, Toronto’s youngsters don’t seem likely to develop into legitimate all-stars anytime soon. In today’s superstar-driven NBA, depth can only take you so far. For all the talk of how Toronto would continue to go 10 deep in the playoffs, it didn’t help them beat LeBron. I’ll take a top-5 player, which Kawhi is when healthy, over 2 or 3 solid, but limited guys every time.

Even if only for a year, acquiring Kawhi Leonard would be a huge coup for the Raptors. It’s starting to look like it could be a reality too.