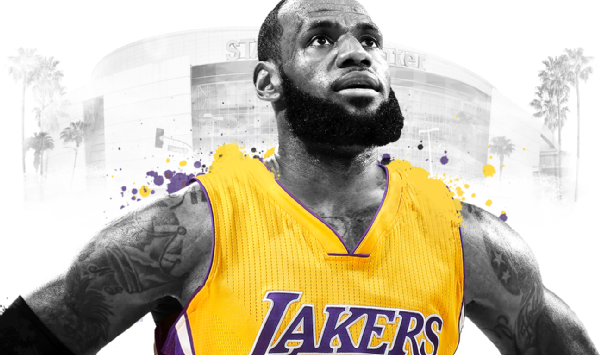 Over half-a-billion dollars were spent by NBA teams on basketball players on day one of free agency. To say that the first day of July was incredible wild may even be an understatement. A day filled with big signings, there were some clear winners and losers to begin the free agent period.

Yes, the Lakers are one of them. No, the Philadelphia 76ers are not. Let’s take a quick look back on the first day of free agency!

After falling out of favour with Paul George, the Los Angeles Lakers made the big splash of free agency by signing LeBron James to a four-year, $154-million deal.

Still pursuing the services of Kawhi Leonard, the Lakers added depth while maintaining cap flexibility and a long-term outlook. Joining LeBron in Los Angeles will be centre JaVale McGee who will provide the Lakers with some athleticism and a shot-blocking presence in the paint, a gritty defender and playmaker in Lance Stephenson, and a versatile guard in Kentavious Caldwell-Pope. The Lakers are also eying meetings with big man Clint Capela and DeMarcus Cousins as their intriguing free agency continues.

To re-assume the title of NBA championship favourites, the Golden State Warriors needed to do one thing and they did just that almost instantly – re-signed Kevin Durant to a two year deal, with the second year being a player option – essentially a carbon copy of what Durant did last summer.

With James opting against signing with the Houston Rockets and Trevor Ariza leaving Houston for Phoenix, the Warriors can sleep easy this summer knowing they are still the class of the NBA. With rumours swirling around Dwight Howard being a potential option for the Warriors, Golden State is not done filling out the back-end of their championship calibre squad.

A well-deserved party in Oklahoma City!

The Thunder could not afford to lose Paul George and with early rumours claiming the superstar forward was eying a return home to California, all hope was almost lost for Thunder fans. Then, everything began falling into place as soon after the start of free agency it was confirmed that George verbally committed to the Thunder, while leaving some money on the table.

The Thunder followed up that signing, granting Jerami Grant an extension. With two superstars secured, the Thunder could really take the next step next offseason once Carmelo Anthony’s dead weight contract comes off the books.

First they struck out on Paul George, then LeBron James.

At 0-2, the Sixers are now down in the count only a day into free agency. Still hopeful of trading for the services of Kawhi Leonard, the Sixers have had very limited luck since the Bryan Colangelo fiasco.

The Lakers are FOREVER gonna be Kobe’s and Magic’s team…. Process that

Despite Joel Embiid’s greatest efforts, the Sixers are still looking to make their first big splash of the summer.

The Rockets failed to get better on Day 1 of free agency, but with the departure of Trevor Ariza, they have taken a step back. Missing out on the LeBron James sweepstakes, the Rockets were still able to ink Chris Paul to a deal without guaranteeing a fifth year, which in itself should be seen as a success.

Nevertheless, with the Warriors still at the top of the food chain and the Los Angeles Lakers instantly getting better with one move, the Rockets cannot afford taking steps back. With Capela slated to have a meeting with the Lakers, it will be crucial for the Rockets to find the cap space to bring their rim protector back into the fold.

Dan Gilbert may be secretly happy, but to be frank, the Cleveland Cavaliers suck now.

LeBron James is gone and the Cavs have a ton of money allotted for the trio of Jordan Clarkson, Larry Nance Jr., and George Hill.   Not to mention the money they still owe Kevin Love, Tristan Thompson, and J.R. Smith. When a team is unable to play the cap, they shoot themselves in the foot very quickly when one thing goes wrong. The Cavs have dug themselves a tough hole to climb out of.