The NBA offseason has become far more unpredictable than the NBA season.

It kind of sucks, but while the summer is going on, we love it. It’s entertaining, its fun, and who knows which star is moved next. Then the regular season begins and we get fun basketball until the playoffs where every team is essentially dismantled by the Golden State Warriors in four or five games.

But that being said, there is still plenty of time until the Warriors do their routine playoff damage, meaning doing a few far too early bold predictions for the upcoming regular season should be totally normal!

Let’s get into it!

The concerns of Kawhi Leonard’s playing status are valid, but take a second to be realistic.

It’s one thing not to care about making the max, it’s another to not get paid at all. If Leonard doesn’t play, not only will he miss out on all the money he is owed for the upcoming season, but he will also face plenty of issues heading into next offseason with his impending free agency looming. Leonard is going to play and he will be as good as ever.

For the first time in a long time, the Raptors have a superstar – a guy firmly in the conversation for top-five player in the entire league. With Leonard in the fold, the Raptors also received the sharp-shooting Danny Green. Both players not only add more efficient shooting to the team, it also greatly upgrades the team’s overall defense.

Even if the Raptors do not make any further moves, it is completely fair to assume that the Raptors can once again finish in the top-five in both offensive and defensive rating.

It’s time to change the Sixth Man of the Year award to the Lou Williams Award.

After being in All-Star discussions for his fine work off the bench, Williams will repeat the feat this upcoming feat, averaging right around 20-points per game off the pine. The Los Angeles Clippers will be undergoing a rebuild, but that will definitely not stop Williams from putting up impressive numbers.

3. The Pelicans Will Miss the Playoffs

After not only making the playoffs last season but advancing to the second round, the New Orleans Pelicans will revere back into a bubble team – most likely finishing up with the ninth or tenth seed.

Despite a pretty formidable starting five, the Pelicans will struggle stringing things together once the second unit enters the game, while the loss of Rajon Rondo will prove significant when Elfrid Payton shows he is incapable of fitting the veteran point guard’s shoes. It will also be very interesting to see how Anthony Davis and Julius Randle, two Kentucky alums, coexist and if the Pelicans will recreate a similar dynamic as when DeMarcus Cousins was in the fray.

Either way, the Pelicans are in for a stressful season.

After stealing the show in their rookie seasons, there will be three sophomore All-Stars in 2019.

Jayson Tatum, Donovan Mitchell, and Ben Simmons will all crack the All-Star team after going neck-and-neck for the Rookie of the Year award just this past season. While Mitchell will face an uphill climb due to have loaded the Western Conference will be, Ben Simmons and Tatum will shine in a weaker East while taking a big step forward in their development. 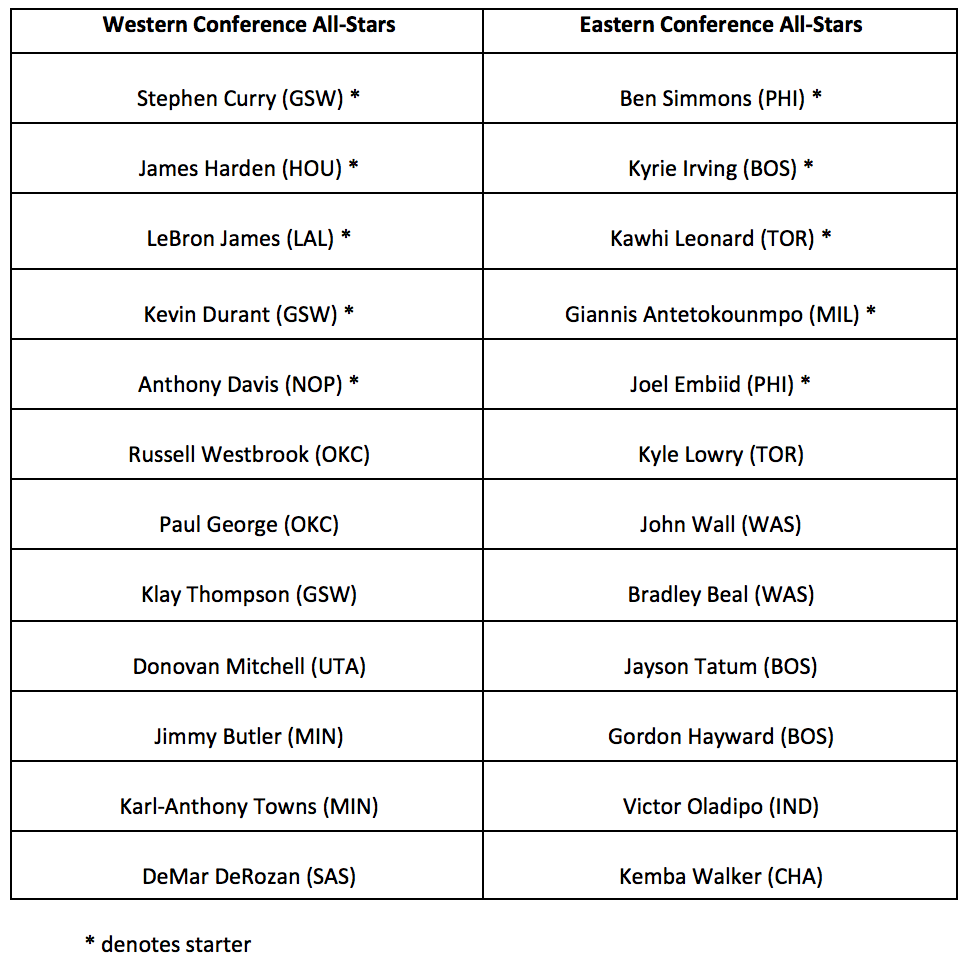 Expect big things to come for this crop of young and exciting talent!

The Los Angeles Lakers finished last season with a 35-47 mark.

Now with LeBron James in the fold, the Lakers will obviously a very noticeable improvement and win over 50-games. While’s the Cleveland Cavaliers win total will more than likely drop by 30, the Lakers will finish the 2018-19 campaign at 54-28, a 19-game improvement from the year prior, and James will be his usual excellent self.

Expect a big season for James as he gets the Lakers back into the playoffs and wins yet another MVP award.