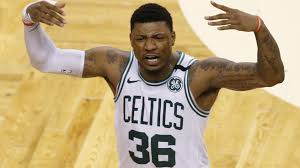 Marcus Smart has not received a contract offer from the Boston Celtics since the start of free agency, and according to reports, the guard is not happy.

The Boston Herald has reported that an anonymous source close to Smart claims that the restricted free agent has grown disillusioned with the the team’s lack of effort to bring him back.

“He loves the Celtics, but with these crickets he’s hearing, he’s hurt and disgusted by it,” said the source.

“He (Smart) would have thought there would have been some kind of three- to four-year deal from them to show they’re interested,” the source continued. “But the ($6.05 million) qualifying offer (on June 29 to retain matching rights) is the only one he has received, and there’s been no talk since free agency opened. He’s most disappointed that there has been no reaching out from their end.”

“He’s just hurt and frustrated that Danny hasn’t reached out. That’s the most discouraging part of this whole thing. The last contact was a few days before free agency started.”

Smart, drafted 6th overall by the Celtics in 2014, averaged 10.2 PPG and 4.8 APG in his 4th season. Though lauded for his defence, he has always struggled with his shot, shooting 36% from the field over his career, and 29.3% from 3-point range. Still, Dante Exum, a less-accomplished fellow 2014 draftee, recently received a 3-year, $33 million deal from the Jazz.

Understandably, then, Smart is mad. Even is Boston retains him for the upcoming season, it is possible that the relationship between him and the team has become too fractured, and one of the team’s defensive stalwarts could be gone in a year.