Putting on a Show Up North 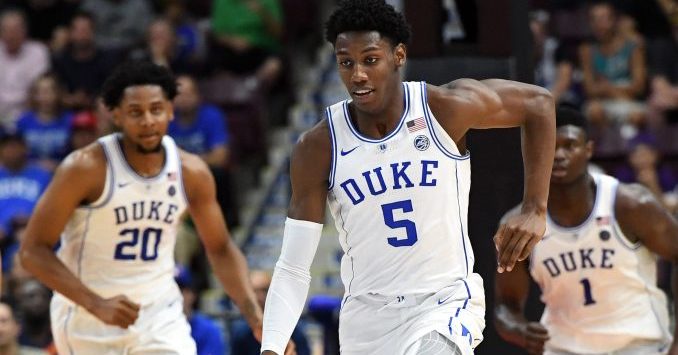 Playing in front of a hometown crowd, top Canadian basketball prospect R.J. Barrett made sure his Duke debut was a good one.

Ryerson led 17-15 after the first quarter, before Duke took over. The Blue Devils were up 40-28 by the half, and never looked back.

Mississauga’s Barrett, the recipient of multiple high school player of the year awards, was helped by Zion Williamson, who added 29 points, 13 rebounds and numerous electrifying dunks.

JV Mukama led the Rams with 20 points and 13 rebounds.

Duke, who feature the top 3 incoming freshmen (Barrett, Williamson and Cam Reddish, respectively), are in the midst of their first-ever trip to Canada. Clearly, demand for the Blue Devils is not limited to the U.S., as Wednesday’s game had a sold-out crowd of approximately 5,400. Friday’s game, also in Mississauga, is expected to be filled to capacity as well.

“This program is legendary man,” said Mukaba. “Never in my wildest dreams did I ever think I was ever gonna play against Duke.

“Especially not here, especially not somewhere with 5,000 people in the stands. This is something I’m gonna remember for the rest of my life.”