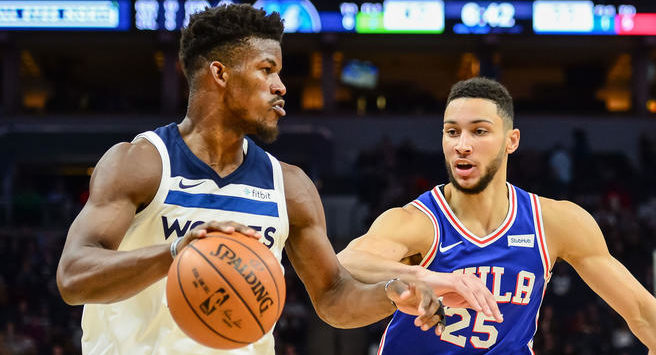 The Jimmy Butler in Minnesota saga has finally come to an end.

As the losses and disfunction continue to mount, the Timberwolves have opted to pull the trigger on a blockbuster deal. On Saturday morning, the Wolves moved their disgruntled All-Star to the Philadelphia 76ers for a package of Dario Saric, Robert Covington, Jerryd Bayless, and a 2022 second round pick. Forward Justin Patton will be traded to the Sixers as a part of the deal.

Assuming Butler passes his physical, he will form a very formidable big three along side emerging superstars Joel Embiid and ben Simmons in Philadelphia. In ten games this season, Butler has averaged 21.3-points and 5.2-rebounds per game.

Jimmy is heading to Philly! pic.twitter.com/UsIveML2Ih

As per Adrian Wojnarowski of ESPN, the Sixers and Butler are interested in a long-term extension. Following the season, the Sixers will be able to offer Butler a five-year max contract worth $190-million.

Meanwhile, in Saric and Covington, the Wolves retain two valuable forwards who can space the floor. Covington is the prototypical three-and-D player, while Jerryd Bayless adds some necessary backcourt depth.

Prior to the announcement of the trade, Butler continued to trash the Wolves.

“We’ve got f—–g guys who can play,” he said. “We’ve got to instill confidence in everybody. I think my confidence is high enough. I want all my guys to be successful, man. I want all these guys to play. Is that a convo (with Thibodeau) that I’ve got to have? Yeah, and then everybody wants to talk about how the motherf—-r’s not healthy (referring to himself). Well God damn, we’re playing 41, 43, 44, it takes a toll on top of all the work that I do that don’t nobody even see. We’ll fix it. We’ll do something. We’ll talk.”

In what was an ugly divorce, both parties are now able to move in separate directions.