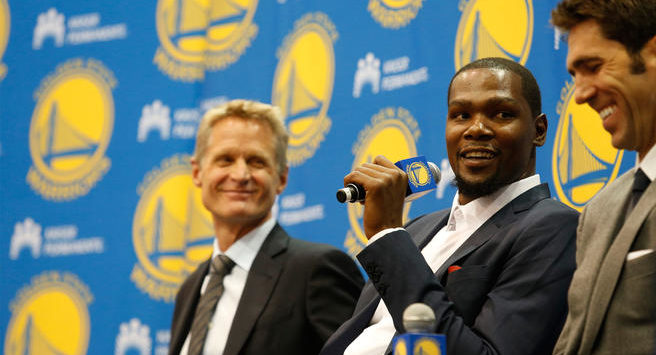 There’s been a sporting overload in Seattle lately.

Not only has the NHL announced it will be awarding the city an expansion team in the 2021-22 season, the odds of an NBA team returning to Seattle continue to increase. Seattle has not witnessed a regular season NBA game on home court since the 2008 SuperSonics.

But if they do return, there is a certain someone interested in owning them.

Golden State Warriors superstar Kevin Durant, who was originally drafted by the SuperSonics in 2007 said it would be a “great story” if he owned an NBA team in Seattle one day once his playing days are over. In fact, the two-time NBA champion has met with current League owners and tech CEOs along with his business partner Rich Kleiman over the past two seasons to begin preparing if an opportunity comes up in the future.

“It’s just the fact that I played there and I get so much love there,” Durant said. “More than any city in the league probably. Look, it would be a great story. But it would be a lot of hard work, it won’t be easy because it’s Seattle…I know people want to tie me into Seattle a lot, and I love being part of that”.

The SuperSonics relocated to Oklahoma City following the 2008 season.