Into the Line of Fire 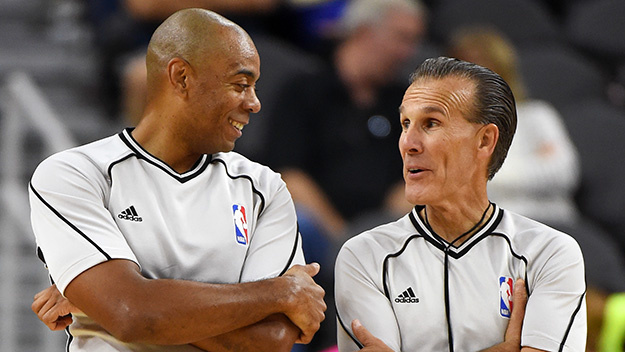 NBA Officials to Interact with Fans During NBA Games via Twitter

In a bid to increase fan involvement, NBA referees are going to break down calls and discuss them with fans on Twitter during select games throughout the remainder of the season, according to Brian Windhorst of ESPN.

Per the report, “During Monday’s Golden State Warriors at Los Angeles Lakers game on TNT and Wednesday’s San Antonio Spurs v Philadelphia 76ers game on ESPN, fans can tweet @OfficialNBARefs or use the hashtag #RefWatchParty to get responses from officials who are watching the game.”

The @OfficialNBARefs #RefWatchParty is returning next week, live from the NBA Replay Center – offering live commentary and real-time officiating insights. Get your questions answered during NBA games on @NBAonTNT and @ESPNNBA using #RefWatchParty. More details to come: pic.twitter.com/uXLS5hgMlA

The NBA tested this concept during Game 3 of last year’s NBA and were satisfied with its reception. The year, the National Basketball Referees Association will be working with the NBA league office and will have access to the replay center in Sacaucus, New Jersey, allowing them to review replays and view controversial or questionable calls in different angles.

For fans bemused during games as to why James Harden’s step-back threes aren’t called travelling, or for those wondering if all of the charges Ersan Ilyasova draws are actually blocking fouls, here is an opportunity to get input in real-time from referees.