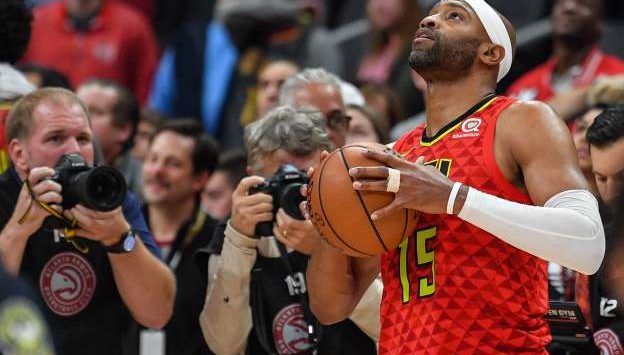 It has been confirmed by the man himself that he is returning for another NBA season.

Vince Carter is not ready to hang it up for good just yet.

After playing out his one-year, $2.4-million deal with the Atlanta Hawks, Carter is looking for new opportunities – opportunities that are not necessarily related to ring chasing.

“I would like to,” said Carter on returning for another season. “We’ll see what happens.”

Carter will give the Hawks the initial chance to re-sign him, but if the franchise is looking towards getting younger, he will look elsewhere in order to extend his career. If the 42-year old Carter is to play another season, he will become the longest tenured player in NBA history, surpassing the likes of Dirk Nowitzki, who has recently retired, Robert Parish, and Kevin Willis.

While there will of course be re-occurring rumours of a Carter-Raptors reunion, the likelihood of the match is slim if the Raptors are to re-sign Kawhi Leonard and hope to continue to compete for an NBA championship. That being said, Carter is coming off a nice season in which he averaged 7.7 points per game in 17.5 minutes. He also eclipsed the 25,000-point plateau earlier in the season.

Where will Vinsanity land for season no. 22?