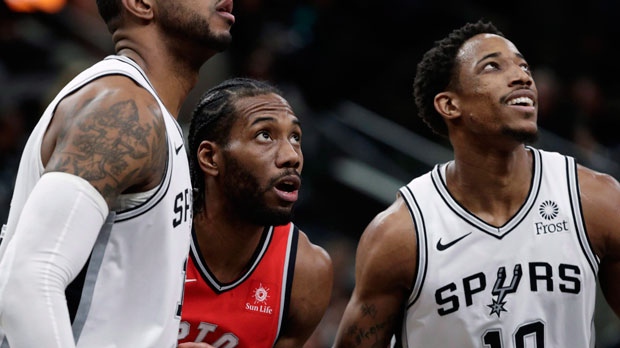 DeMar DeRozan Has No Ill Will Towards Raptors, Happy for Former Team

He embraced Canadian culture and when Toronto Raptors basketball hit one of its lowest points, DeRozan vowed to lift it back up. Against all odds, he did exactly that, helping the organization build a contender and an Eastern Conference powerhouse alongside All-Star teammate Kyle Lowry.

Then, after nine years, Masai Ujiri traded the franchise cornerstone to San Antonio for Kawhi Leonard – easily the single greatest talent to ever put on a Raptors uniform.

"We all human. We all feel some type of way."@DeMar_DeRozan explains how he felt watching the Toronto Raptors win a NBA Championship last season. Don't get it twisted, though. He still has all the love for that city and fan base. pic.twitter.com/hhMo3dUIHi

The rest was history.

Now, the Raptors open up the new season as the reigning NBA champions and the always-classy DeRozan has no ill will for the organization that traded him a little over a year ago.

“We all human,” DeRozan said. “We all feel some type of way; if you’ve seen a previous situation that you was part of accomplish something great that you was after when you was there – of course.”

Give this man an honourary championship ring on behalf of the franchise!

“I spent nine years of my basketball career there,” DeRozan said Monday during the Spurs Media Day. “Even at times when I see pictures, seeing my jersey on in the crowd, you are there some way, somehow. You got to be happy with that.”

Although DeRozan was not part of the team’s championship run last season, without him, the Raptors would have never reached the mountain top of the NBA world.