Is Raptors’ Pascal Siakam the Game’s Next International Superstar?

“That dude can’t be stopped.”

Since being selected 27th overall in the 2016 NBA Draft, I often praised the Toronto Raptors for selecting the relatively unknown prospect out of the University of New Mexico by the name of Pascal Siakam.

Look no further than the BallnRoll Pick-n-Pod podcast, I have never shied away from praising the Cameroonian forward, lauding over his potential. In Siakam, I saw a projectable, six-foot-nine super-athlete with a high motor and an impressive feel for a game that he hasn’t even played for a big chunk of his life. He didn’t really know how to shoot, but at his size, he showed an understanding of how to put the ball on the floor and boy, could he outrun just about anyone in the league.

With a late first round pick, the Raptors were able to take a risk.

It was a similar gamble that the Raptors took with Bruno Caboclo just two years prior. Raptors president of basketball operations Masai Ujiri was not afraid to take another shot after the initial project seemed to be going in the wrong direction. If we look at the history of the draft in almost every sport, often times teams selected players who are relatively new to the game, but makeup for the lack of experience with raw talent, projectability, and feel.

Siakam had all three, but for an athlete who grew up playing soccer, he didn’t know how to play basketball.

Raw talent, projectability, and feel can only take a professional athlete so far, but if they aren’t able to grasp the game itself, then things will never click. You see it time and time again in the MLB, where organizations draft super athletic football players who also dabble in baseball and lean their hat on the innate athleticism of the athlete translating to baseball. The risk is high, but so is the reward and very often, the athlete never figures it out and fizzle out in the minors never to be heard of again.

Nevertheless, innate athleticism is something you cannot teach and Siakam had everything a team would want in a prospect. Then it was up to the Raptors to take the tools and help everything come together.

In his rookie campaign, it was easy to see the extraordinary feel that Siakam had for the game. Look no further than the nifty no-look passes he would dish off to Jakob Poeltl in the paint or the way he knew exactly where to be on the court, especially on fast breaks.

Now, he’s putting everything together, and there’s more to come.

The 2018-19 season was nothing more than a coming out party – a year that the Raptors organization expected when they initially drafted him in late June back in 2016.

On his way to capturing the league’s Most improved Player of the Year award, the third year forward averaged 16.9 points and 6.9 rebounds per game while improving as a shooter (54.9-percent from the field, 36.9-percent from long range) and taking his ball-handling and defensive ability to another level. He finished the season in the top-20 in win shares (9.3), offensive win shares (5.7), and true shooting percentage (62.8-percent). 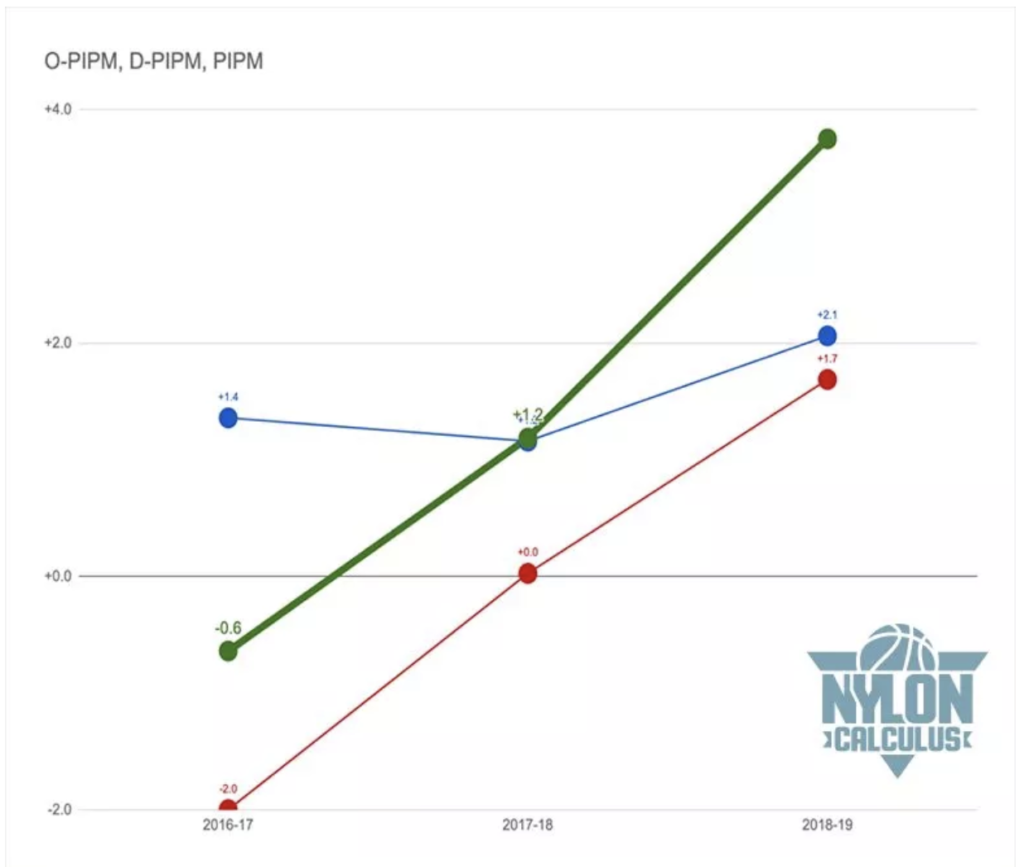 The above graph verifies that since entering the NBA, Siakam has always been an above average defender (blue) according to his Player Impact Plus-Minus, but as evident by the red line, his offensive output has increased by leaps and bounds with each season.

“[Siakam] has become a guy,” said Draymond Green after Siakam shelled the Warriors in Game 1 of the NBA Finals with 32 points on 14-for-17 shooting.

With Kawhi Leonard out of the picture, Siakam is now the guy in Toronto. The Raptors went 17-5 in games Leonard did not play due to load management (Siakam missed two of those 22 games), and despite increased attention from opposing defenses, Siakam’s usage increased and so did his productivity and scoring.

There is no telling what Siakam’s ceiling is.

A 22-percent three-point shooter just two years ago, Siakam saw a 15-percent spike last season, transforming into a viable shooting option from the perimeter, especially from the corners. While Siakam is by no means a finished product as a perimeter shooter, Siakam will also need to develop a more consistent mid-range shot as he transitions into being the man for years to come in Toronto. Siakam often looked aggressive on offense last season, and despite being an unselfish player, the Raptors will expect even more aggressiveness this upcoming season. By all accounts, the numbers suggest that Siakam can take the next step.

Last year, according to Arjun Balaraman of FanSided, Siakam ranked in the top five among players who played in over 1,000 minutes in terms of points per possession as a pick-and-roll ball-handler, a mark that matched that of reigning league MVP Giannis Antetokounmpo. In fact, his similar downhill style of player resembles that of The Greek Freak and so do his third year numbers.

Of course, Giannis was able to accomplish the same numbers at a younger age than Siakam who spent two years in college while Antetokounmpo entered the NBA as an 18 year old. This uncanny comparison is by no means a hot take that implies that Siakam will become a similar force as Antetokounmpo, who is younger, longer, and bigger than Siakam, but I am going on the record to say that Siakam will become an unstoppable two-way player.

At only 25, Siakam’s best years are in front of him. He is no longer the “second best player of the team”. With the aging Kyle Lowry entering his walk year, the 2019-2020 season will see a changing of the guard as the elder statements will hand the keys down to the young buck.

“I just think his next step in progression is being ‘The Man,’” Head Coach Nick Nurse told Yahoo Sports Canada earlier in the Summer. “Instead of being a complementary guy next to ‘The Man,’ he’s gotta be ‘The Man’ — the primary scorer and the primary option and the late-game scorer.

“There’s lots of little steps left to climb yet for him and I think the sky’s the limit.”