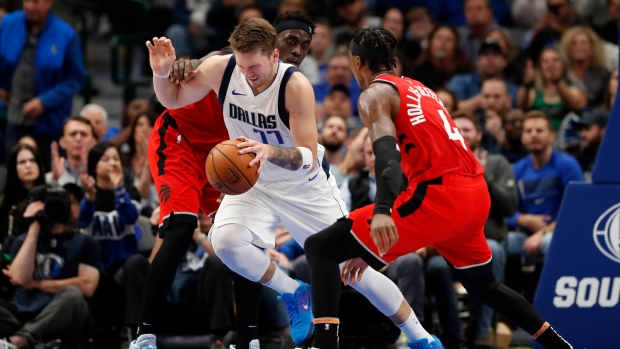 Despite a loss to conclude an incredibly tough road trip, the Toronto Raptors should head back to Canada with their heads held high.

“Three-and-two and we lost two of our most important players,” said Norman Powell. “We’re not holding our heads though. We’re going to get in the gym and do better, correct our mistakes.”

In the absence of Kyle Lowry, Serge Ibaka, Patrick McCaw, and of course OG Anunoby for two games, the Raptors pieced together their first winning west coast road trip since 2002. Between a tough whistle and Pascal Siakam’s first poor showing of the season, the shorthanded Raptors defensive efforts were unable to slow down the Dallas Mavericks on Saturday night, en route to a 110-102 loss.

Despite limiting Luka Doncic from the field, the Raptors were decimated by the international star at the free-throw line. A big night from Kristaps Porzingis only added to what turned out to be a tough and inconsistent night for the reigning NBA champions.

“I felt much more comfortable today,” Porzingis said after a 20-point and 15 rebound night. “It felt more natural today, not as forced. I just missed a lot of good looks, a lot of open shots, but I’m happy we got the win. If I scored a few more of those open looks, it could have been a much easier game for us.”

Once again, the Raptors struggled mightily on the glass. The Mavericks out-rebounded the Raptors 55-42 for the game, including 12-7 on the offensive glass. Moreover, the Mavs shot 18 more free-throws than their opponents on a night when the whistle was incredible strange to say the least.

“We weren’t quite good enough,” Raptors head coach Nick Nurse said. “They made some good plays but I thought we kept hanging in there and felt pretty good but the start of the fourth really hurt us to get back down.”

Siakam struggled mightily on Saturday night, but Powell stepped up for the Raptors with a season-high 26 points. Fred VanVleet added 24 points in the loss.

“They are a good team and they played some good defence but I think at stretches we kind of found ourselves in a little mud and I think that had to do with the long road trip,” Powell said. “Guys were ready to get home, but I think we stayed with it and fought to the end.”

After a long road trip, the Raptors return home to take on the Charlotte Hornets on Monday night.

Is Freddy That Guy?