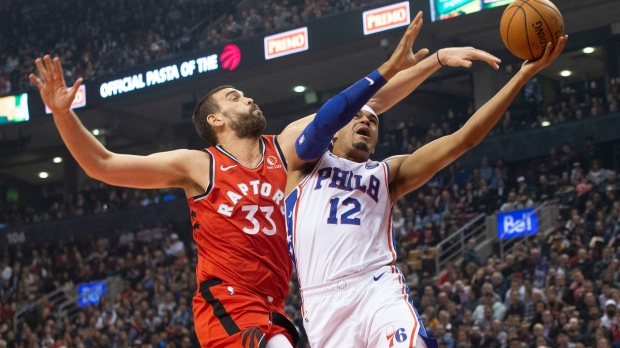 It was a playoff-like atmosphere in the Scotiabank Arena in Toronto on Monday night.

It was a rematch of the Eastern Conference Semifinals between two Eastern Conference powerhouses. The Philadelphia Sixers took on the under-manned Toronto Raptors in easily one of the best contests of the young regular season. It was the first time the two teams met since The Shot and boy did this game not disappoint. With a unique mix of old and new faces for this night’s contest, the result was similar to that of Game 7 – the Raptors came away triumphant again.

“We don’t want to lose anybody else,” Head Coach Nick Nurse said following the 101-96 nail-biter. “Seems like we got quite a few guys out, but on we go. On we go.”

In a back-and-forth affair, both teams took turns taking the lead.

After the Raptors took a slim one-point lead into the final frame, it was the Sixers who came out in the fourth with a head of steam, taking control of the game. Up six in the winding minutes of the game, the script flipped and the reigning NBA champs put the clamps on their opponents.

Not only did the Raptors hold All-Star Joel Embiid scoreless for the entirety of the game, a feat that no other team has been able to accomplish in Embiid’s NBA career, the Raptors also prevented a single score from their opponents in the final four minutes of the game. An incredible defensive effort was all the Raptors needed to battle back, take the lead, and secure a huge statement victory.

“I think we ended it with eight consecutive stops to end the game, that’s pretty good, especially in a close game like that,” Nurse said.

Embiid finished the game missing all 11 field goals he attempted, but was still able to grab down 13 boards.

Led by a combined 49 points from Pascal Siakam and Fred VanVleet, the victory required a total team effort. Marc Gasol did an exceptional job shutting down Embiid all night. OG Anunoby was all over the court making defensive stop after defensive stop. Norman Powell, albeit on a night where he shot the ball poorly, hit two crucial three pointers for the Raptors. As always, the combination of Terence Davis and Rondae Hollis-Jefferson off the bench proved to give the Raptors yet another key spark.

“(It was) just being physical with them, not giving them easy shots, obviously making it tough for Embiid to catch it,” Siakam said following the win.

Although it is still early and the Raptors are still working on getting back to full health, it is very clear that this victory was an important one for the Raptors to pull out. The focus remains on the postseason, but these are the type of wins that build confidence and chemistry throughout a long regular season.

“Obviously, you’d like to measure a little bit more with your full complement of guys,” Nurse said. “Some of these younger guys, or new guys, it’s a test to see how they’ll match up with a team that’s obviously going to be in the hunt for the Eastern Conference Championship at the end of the year.”

Winners of four straight games, the Raptors will now welcome the 4-13 Knicks to the Scotiabank Arena, a place where they have won each of their last 32 games against divisional rivals.