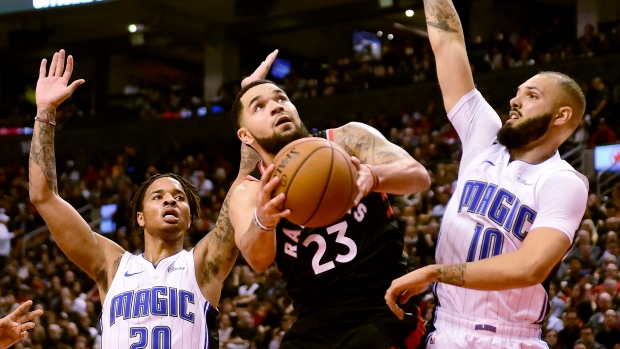 The Orlando Magic cannot figure out the Toronto Raptors.

Despite being undermanned yet again, the Raptors remained undefeated at home, taking out the Magic by a score of 113-97. Led by 24 points from Fred VanVleet and a new career high from Terence Davis (19 points) the Raptors continued to roll on both ends of the floor.

“His finishing, his layup package is insane,” Pascal Siakam said after the win. “He’s fast, crafty. He always knows how to kind of use his body. So it’s definitely impressive what he’s been able to do. He’s just playing at a very high level right now.”

After a slow start to the contest, the Raptors kicked it into gear on defense in the second quarter, taking a lead that they would not relinquish. As the trend has been over the past few weeks, the second unit continued to perform in support of an undermanned starting unit. Paced by another incredible effort from undrafted rookie Davis, Chris Boucher poured in a 14-point and 11-rebound performance in the win.

“We’re just some hard-playing guys, just bringing energy,” Davis said. “On the bench today Chris … just pointed up, like when we get in we’ve got to pick the energy up. It’s just about energy and then the game just takes care of itself. We’ve been playing together for a few games now and it’s really just bringing energy and taking what the defence gives up.”

The Raptors will continue their run on Saturday against the Atlanta Hawks and expect to have Serge Ibaka back in the fold. Ibaka has been nursing a sprained ankle injury over the past couple of weeks.