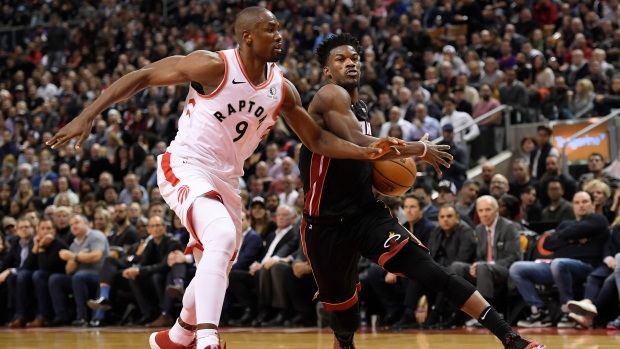 Raptors Get Lowry Back, See Win-Streak Snapped in Thriller Against Heat

Sometimes you have to take the good with the bad.

The bad news is the Toronto Raptors watched their seven game win-streak come to an end on Tuesday night, but nevertheless, there were still a number of positive takeaways from the loss. The main one being the return of All-Star Kyle Lowry, who played his first game following a lengthy absence after suffering a broken thumb earlier in the season against the New Orleans Pelicans.

Despite a very rough shooting game for Lowry, who finished with 12 points and 11 assists, the night was an important step in the right direction for the Raptors who could really use Lowry as their schedule difficulty turns up a couple of notches.

“That’s terrible. That’s rhythm,” said Lowry, who shot 2-of-18 from the field on the night. “I missed shots, I didn’t force anything, everything I shot came within the offence and honestly a lot of those threes went in and out. I haven’t done basketball-type playing since New Orleans (Nov. 8) so it takes a game, but I’m sure I’ll be better next game. It’s nothing to be concerned or worried about.”

In a game in which it seemed like the Miami Heat had the answer for every Toronto push, the Raptors clawed their way back late in the fourth quarter, forcing overtime, but ultimately were unable to close out, losing by a score of 121-110. This marked their first home loss of the season.

“I thought (Miami) played with great energy, they were really flying around at both ends, much, much more than we were so that was kind of the first thing,” Raptors coach Nick Nurse said. “Then I thought they made really great reads out… they hit the right guy and that right guy made a lot of shots as well. Or they took it to the basket and made some good finishes.”

For the majority of the night, the Raptors struggled staying consistent offensively. The no. 1 three-point shooting team in the league was held to just 26-percent from long range and only 38-percent from the field.

“They are a very physical team, they’re well coached and the organization is built a certain way,” Lowry said. “They came out and they showed some grit tonight and we still had a chance to win the game, so you can’t be mad at that.”

A fourth quarter burst from Norman Powell who finished the night with 23 points gave the Raptors a semblance of hope, and covered up the fact that the Heat were the better team on the night for a mere few minutes. Once overtime began, it was no question as to who earned the win as Jimmy Butler took the game over, propelling the Heat to a big statement victory over the reigning champions.

“Obviously, Jimmy was pretty darn good, at that point,” said Heat coach Erik Spoelstra. “He didn’t have a ton of energy — at that point had already played 40 minutes, but it was like, alright, I’m just gonna make sure we seal this and this doesn’t get to a second overtime, or even worse, a loss.”

The schedule remains tough for the Raptors who welcome the Houston Rockets into town on Thursday night before traveling down to Philadelphia for the weekend.