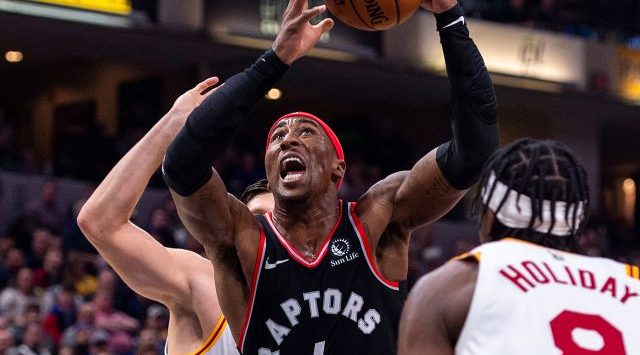 Undermanned and on a second night of a back-to-back, the Toronto Raptors fell short in Indiana.

Mind you, the Pacers are still playing without Victor Oladipo, were also playing on the second night of a back-to-back, and were without the services of Malcolm Brogdon on what was a wild night at Bankers Life Fieldhouse.

Missed free throws and an inability to close out on shooters burned the Raptors on Monday night as they failed to capitalize on the final possession of the fourth quarter and ultimately fell to the Pacers in overtime by a score of 120-115. Hitting four-of-six three-pointers in overtime and 18-of 42 for the game, the Pacers took out the defending champs, inching close to leapfrogging the Raptors in the Eastern Conference standings.

“We gutted it out, we played our butts off and gave ourselves a chance to win at the end,” Kyle Lowry, who once against was the heartbeat of his injury-riddled team, said following the loss. “Unfortunately, we came up short.”

Lowry led the Raptors with 30 points and nine assists. Serge Ibaka and Fred VanVleet combined for their own 44 points, but they came up just short. There is no disputing the heart of the Raptors, but these are the types of games that given the circumstances, are very tough to win, let alone hang around in.

“We got ourselves a five-point lead, probably should have put it away there but give them credit,” Raptors coach Nick Nurse said. “A bunch of 3’s late, a bunch in the fourth quarter, a bunch in overtime.”

Between Myles Turner and an array of role players, the Pacers refused to quit on their home floor. Cooling off after a great start, the Pacers were able to force overtime where a barrage of three-pointers and defensive tenacity silenced the champions.

“Resilience, that’s what we showed tonight,” said Pacers coach Nate McMillan. “That’s one of the better teams in the conference. We knew they were going to be a team that scrapped, and our guys came and they fought. They kept their composure throughout the game, despite losing the lead, and stayed with it.”

Falling to 21-9, the Raptors saw their five-game win-streak snapped in Indianapolis. On Christmas Day, they’ll have a chance to start a new one as they take on the Boston Celtics at the Scotiabank Arena.