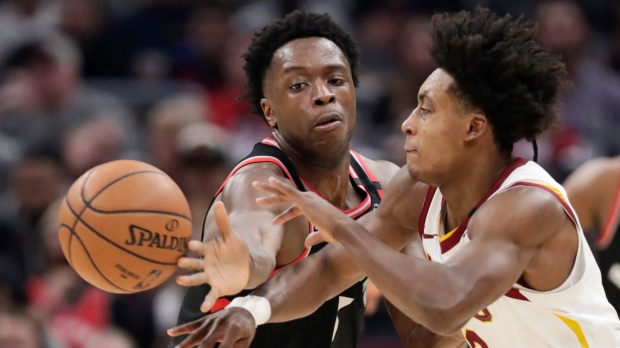 It was just another night in the office for Kyle Lowry who was named to his sixth NBA All-Star team earlier in the evening.

Surpassing Vince Carter and Chris Bosh for most All-Star selections in franchise history, Lowry was his typical self on Thursday night, leading the Toronto Raptors to a ninth consecutive win. Despite the absences of Marc Gasol and Rondae Hollis-Jefferson, Lowry took care of business, pouring in 23 points on the night.

Following the 115-109 win, Lowry commented on yet another All-Star nod.

“It was cool, man, because I wouldn’t be here without my teammates,” Lowry said. “Those guys literally let me lead them and I love them for it. Being there with P (Siakam), it’s going to be awesome.”

Serge Ibaka scored a game-high 26 points, while Siakam added 19 points of his own. Norman Powell had yet another strong game off the bench, dropping 16 points. In a game that could have gone either way, it was Powell’s remarkable play in the clutch that allowed the Raptors to improve to 34-14 on the season.

“That was anybody’s game from start to finish, to be honest,” Raptors coach Nick Nurse said. “You’ve just got to grind it out and find a way.”

Through 48 games last season, the Raptors were 35-13, just one game ahead of the current roster, an amazing feat considering the overwhelming amount of injuries the reigning champions have faced. The Raptors trail only the Milwaukee Bucks in the Eastern Conference.

“It wasn’t just a tremendous player like Kawhi,” Cavaliers coach John Beilein said. “They have a lot of the pieces that you need to win at the level they’ve been winning at.”

With hopes to push their win streak to 10 games, the Raptors face the Detroit Pistons on Friday night.