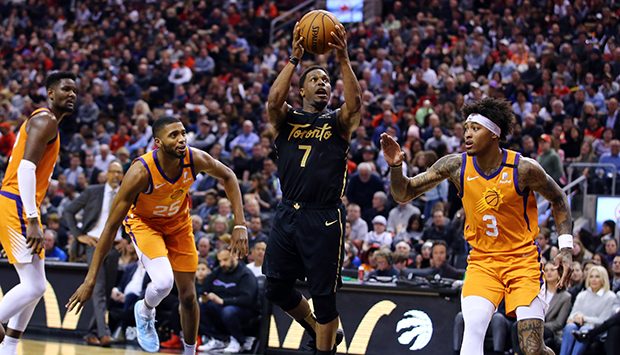 Toronto Raptors Start Unofficial Second Half of Season with a Win

It’s back to work for the Toronto Raptors as they kicked off the unofficial second half of the season on a high note.

As you would expect, after a lengthy layoff, the Raptors were came out the gate sloppy with the basketball. Despite being a little bit out of sync for the majority of the night, which led to 22 turnovers, the Raptors were able to buckle down when necessary to route the Phoenix Suns by a score of 118-101. Behind a season-high 13 blocked shots, the Raptors relied heavily on their defense in times the offense slumped or looked discombobulated.

“I didn’t have much fun out there tonight coaching. It wasn’t very enjoyable,” said head coach Nick Nurse. “But as I sit here now and look back on it, I don’t mind that it got a little tough and tight and we had to bounce back and respond and guard and execute great down the stretch. It’s a nice learning moment I guess, a confidence-booster actually.”

Playing without Marc Gasol, Norman Powell, and Patrick McCaw in the lineup, the Raptors got a big boost from their first- time All-Star Pascal Siakam who poured in a huge 37 points and grabbed 12 points in the win. On top of Siakam’s brilliant performance, the Raptors saw six other players finish the game in double-digit points.

“They’re all on the same play, they play on a string on both ends of the ball, there’s no confusion,” said Suns All-Star Devin Booker of the Raptors following the loss. “Their timing is hitting on all cylinders. That’s what happens when you play deep in the playoffs with teams and you fight together. That’s a high-caliber team.”

At 41-15, the Raptors are set to begin a tough week of basketball which will include a game against the NBA-leading Milwaukee Bucks and Western Conference powerhouse Denver Nuggets.