For the Love of the Game

A Long-Standing Love Affair with the Game of Basketball

Love. A four-letter word that can never quite be explained by one singular definition. Is it a genuine feeling of admiration for a person, thing, or idea?

Love is beautiful. It can be the best feeling and the worst at the same time. Every time you open your heart, you leave it open for heartbreak. But still, you crave it. You wish for it. Even if you may get hurt again, you long for it. That feeling where nothing else matters, but the one you love.

The Toronto Raptors were terrible after Vince Carter left. Still, I found reasons to tune in to Raptors games. My father and I would sit down and watch every game together.

I’m not sure what kept us watching through losing season after losing season. You could almost call it an unwavering belief that something good would come from watching a terrible sports team. I wouldn’t call it religious, but I always believed the Raptors would be great someday. 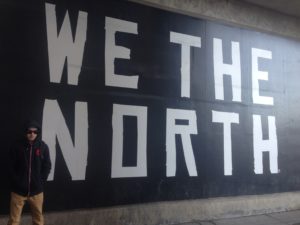 There was a certain charm to watching a developing team in the middle of a rebuild. It’s like having a crush on a person that people don’t quite appreciate in the moment, and then they grow up to become rich, famous, or beautiful.

The team eventually made the playoffs in 2014 and matched up with the Brooklyn Nets. That series was a back-and-forth affair, going the full seven games. Every Raptor basket, every foul, was accompanied by a scream, a chest bump, a cheer.

It was game seven of the first round of the 2014 playoffs. The Raptors were down by one point and needed one basket to win the series. They advanced the ball to Kyle Lowry. He split his way through two defenders. In the moment, I thought the play was horrible. It couldn’t have been messier.

Somehow, Lowry found himself near the front of the rim. He was met by Brooklyn Nets forward Paul Pierce. To this day, I firmly believe Lowry was fouled on that play. As Pierce made an effort to block the shot with his left arm, his right arm made contact with Lowry’s shoulder, and should’ve been called. As Lowry lay on the floor, arms covering his face, I too ran upstairs to my bed, face down on my arms, and cried.

The Raptors (and I) would suffer multiple playoff heartbreaks over the next few years. The narrative that the Raptors were playoff chokers became the punchline of NBA fans.

Love isn’t always about heartbreak though. Remember when I said, “but still, you crave it. You wish for it. Even if you may get hurt again, you long for that feeling. That feeling where nothing else matters, but the one you love”?

Friends would laugh at me when I had the nerve to write an article about whether the Raptors had a chance at winning the 2019 NBA Championship. I said in that piece it would take something special for the Raptors to win the title.

That’s exactly what it took. It was a special playoff run. A game one curse was further solidified as I predicted. A shot in the second round, heard around the world, effectively ended the doubts, the memes, the punchlines, about a franchise that could never get over the hump.

When the American media said it was over for the Raptors in the East Finals, they overcame a zero-two deficit with hustle, heart, defence, and the birth of a newborn son which lit a fire in Fred VanVleet’s jump shot. In the 2019 NBA Finals, the Raptors defeated the dynasty of the Golden State Warriors and brought home the Larry O’Brien Trophy for the first time.

The Raptors became the 2019 NBA Champions. For someone who’s seen the team in its ups and downs, it was so gratifying to go from watching the guy that once lay on the floor, after missing the game-winning shot, to now seeing him raise the trophy. 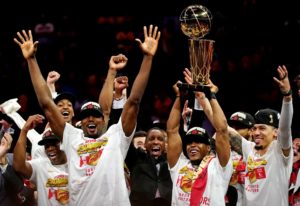 I still long for those feelings of being on the top of the world. I still long for that feeling of euphoric emotion, where I can feel no shame about singing, We are the Champions by Queen for everyone on my social media feed to hear my horrid vocals.

My heart was once again open. Nothing else mattered because we were champs. In a couple weeks my heart would be broken once again.

Kawhi Leonard leaving the Toronto Raptors was like the breakup we never want to go through as people. 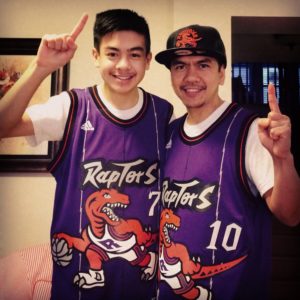