A Long Awaited Matchup: Raptors vs. Celtics Second Round Preview

Boston and Toronto sports fans do not like each other. Their rivalry has been well represented through various playoff series’ in the NHL with the Boston Bruins and Toronto Maple Leafs. Now the fans and the teams get to face off on 94-feet of hardwood in the NBA’s Eastern Conference semi-finals.

Raptor and Celtic fans have eagerly awaited this match up of Atlantic division rivals in the playoffs due to their fanbases being equally passionate (and at times delusional) about their teams.

The two teams have also had many close and entertaining regular season matchups, which makes this playoff series even more intriguing from a casual fan’s perspective.

Regardless of if you are a fan of these teams or not, this series is a must-watch as both teams are extremely talented and  confident in their abilities to defeat one another. Out of this series, the winner could very well go on to make it out of the East and compete for this year’s championship. 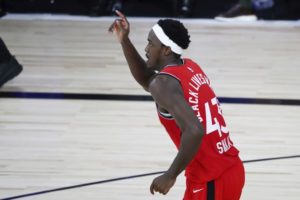 Head-to-head, the Celtics have the all-time series lead in the regular season with 57 wins to Toronto’s 40. In the 2019-20 regular season, Boston has also taken the regular season series three games to one, with two notable victories. The first notable win came on Christmas Day in Toronto, and the second came in a blow-out victory during the seeding games in Orlando.

The Raptors have had a rather pedestrian offence this year, ranking about middle of the pack at 14th in offensive rating. Where the defending champs hang their hats is on the defensive end, finishing the regular season with the league’s second-best defensive rating at 105.0.

The Celtics on the other hand are the far better offensive team by the numbers, boasting the league’s fourth-best offence. Boston is also no slouch on the other side of the ball as they are rated as the fourth-best defence in the league.

When two great defensive teams play one another, the offensive side of the ball is what will likely decide the outcome of this series – who can hit the most shots consistently? On paper, the Celtics look to be the better team on offence, but the Raptors have dealt with injury after injury throughout the regular season which has kept key contributors in and out of the lineup.

It’s possible that the Raptors haven’t unlocked their true potential yet on that side of the basketball. It’s also possible that Nick Nurse has a top-secret gameplan that he’s waiting to unleash on the Celtics. Only time will tell.

Which Stars will shine the brightest? 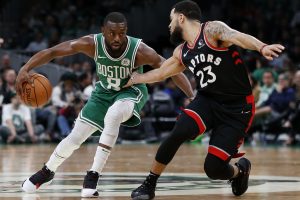 A popular debate among NBA fans is the prospect of Jayson Tatum vs. Pascal Siakam, who would you take to start a basketball team? The two players have both had their moments in the postseason, with Tatum’s coming in his rookie year where he and the Celtics came one game away from making the NBA Finals.

Siakam’s ascent to NBA stardom was like a crescendo, a gradual improvement over a couple years, and it culminated in a breakout postseason last year.

So far in the bubble, Siakam hasn’t looked quite like himself. From an observer’s eye, it seems like Siakam is forcing the issue too often. Engaging in early shot-clock pull-up threes and making errant passes that have no where to go are just some of the observations that indicate Siakam could be in a bit of trouble against a defensively savvy team like Boston.

For Siakam to be successful in this series, he needs to let the game come to him instead of forcing himself to be an isolation threat. Siakam thrives off of rhythm, ball movement, catch and shoot opportunities, his patented spin-move, and posting up. He could eventually develop into a deadly isolation scorer, but against the smarter defensive teams Siakam isn’t quite at that level yet.

Tatum on the other hand is one of the best young isolation threats in the league. He was on an absolutely nuclear tear in January and at that point he looked like the most dangerous scorer in the association not named Kevin Durant. Since then he’s cooled off just a bit, but his ability to score will be a huge factor for Boston’s success in this series.

It will be interesting to see what defensive schemes Nick Nurse and co. draw up to contain an offence like Boston’s (and likewise on the Celtics’ side with Brad Stevens).

The X-Factors: Who’s Going to make the Open shots? 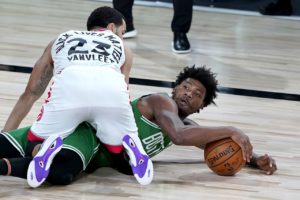 For the Raptors, the production from their supporting cast could be the factor that tips the scales Toronto’s way. Guys like O.G. Anunoby and Marc Gasol haven’t had too many games where their offence has looked sharp. The Raptors desperately need them to be contributors on both ends. Against the Celtics, the Raptors cannot have any non-factors on offence, as it will only let the Celtics send help defenders off of players who struggle to hit open shots (as they did in the one bubble game).

The Raptors need someone like a Terrence Davis II or Matt Thomas to be the spark plugs off the bench, hitting pressure release threes and providing scrappy defence.

The Celtics’ X-Factor will be Marcus Smart. With Gordon Hayward’s absence, Smart has been inserted into the starting lineup. He is an intelligent and relentless defender at the guard spot, and he is capable of switching onto some forwards. The biggest weakness in his game has always been his ability to make shots.

The same way the Celtics could potentially send help defenders off of a O.G. Anunoby or Marc Gasol, the Raptors could very well do the same to Marcus Smart. If he can make the Raptor defence pay whenever he’s left open, he can help unlock the Celtics’ offensive potential during this series.

There will be plenty of open shots in this series for the players that haven’t shot the basketball well, and the winner of this series may just be the team that can get those players to hit more of them. 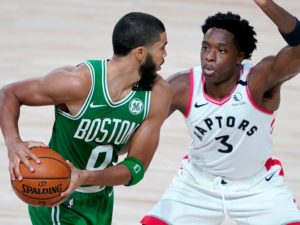 This is certainly a hard series to predict, as the teams are so evenly matched. The Celtics have certainly gotten the best of the Raptors as of recent, and they would be a popular pick to advance here given they also just swept their first round matchup against a far better team.

Aside from the play of both team’s supporting cast and star players, it’s most likely going to come down to which team has the better X’s and O’s on both ends. The most intriguing part about this series is both teams haven’t really played too many games against each other where both were 100% healthy, and it looks like neither will be completely healthy at tip-off.

We’ll have to see if Nick Nurse and Brad Stevens have some cards left in their hands, in a series where there are plenty of potential unknown factors yet to be revealed.

The status of Kyle Lowry’s health will certainly be of interest for both the Raptor fans and staff, as it looks he may be out for a couple games with a sprained left ankle.

Being extremely hesitant with this pick, going to say Raptors in seven games, and it will be a tough, scrappy, and potentially confusing series to watch. Could see this one going similarly to last year’s second round matchup between the Raptors and Sixers.

No matter how this series plays out, it’s guaranteed that fans will get an entertaining clash between two of the NBA’s best fanbases and teams.